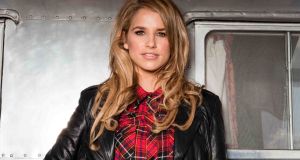 Model and DJ Vogue Williams has settled a breach of contract claim against a Dublin dental clinic, the Circuit Civil Court has been told.

Williams’ €38,000 damages claim was against the Seapoint Clinic Ltd, Seapoint Avenue, Blackrock, Co Dublin. The clinic had denied it had been in breach of an alleged agreement with her and had made a counter claim. No details of the settlement were revealed in court.

She had claimed that in January 2012, she had an agreement with the clinic for dental treatment which included the replacement of a temporary crown, the fitting of braces and veneers, and cosmetic treatment, for an agreed sum just short of €7,000.

Williams, who separated from her husband Brian McFadden in July, had claimed she had sought to have the treatment carried out for her wedding to the former Westlife singer in September 2012.

She said she had agreed to do an interview with an Irish newspaper or magazine and a video testimonial promoting the clinic’s website and professional services.

Williams, of Howth Lodge Apartments, Claremont Road, Howth, Co Dublin, claimed that after having provided the clinic with the agreed publicity, it had sought full payment for the carrying out of her dental procedures.

Williams also claimed that between January and June of 2012 she had fulfilled her publicity undertakings and alleges that a breach of contract arose when the clinic then sought full payment for the treatments.

She alleged that in August 2012, just a month before her wedding, she rescinded any agreement she had with the clinic. She claimed she had been caused upset and worry at a time she was preparing to get married.

Seapoint Clinic, which had delivered a full defence and counter claim to Williams’ proceedings, alleged she failed to attend a number of appointments which she had failed to cancel and, as a result, the clinic had been put to expense and costs.

The clinic, which claimed Williams owed them more than €5,000 for her treatment, alleged it is she who was in “fundamental breach of contract” and was therefore not entitled to succeed in a claim for damages.

It also claimed the work done by Williams on behalf of the clinic would amount only to the full value of the treatment.

Barrister David Boughton, for Williams, told Circuit Court president Mr Justice Raymond Groarke his client’s claim had settled and could be struck out with no further order.

Barrister Shane English, for Seapoint Clinic, said the defendant was consenting to the order.