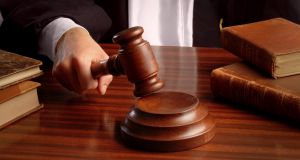 A man who “stormed into” a restaurant, knocking several table settings to the floor before making racist remarks and a threat to the owner, has had an appeal against his sentence dismissed.

Paul McCarthy (40), with an address at the Simon Community, Anderson’s Quay, Cork city, had pleaded not guilty to making a threat to kill or cause serious harm and producing of a broken bottle to intimidate someone at N Square restaurant on Camden Quay in the city on December 6th, 2014.

He was found guilty by a jury at Cork Circuit Criminal Court and sentenced to six years imprisonment with the final 18 months suspended by Judge Gerard O’Brien on May 5th, 2016.

McCarthy had an appeal against the sentence dismissed on Tuesday with the Court of Appeal unable to find an error in principle in the sentence.

Giving judgment, Mr Justice John Edwards said McCarthy and a woman had “stormed into” the restaurant premises on Camden Quay on the date in question in possession of a cardboard box. They were abusive and knocked several table settings to the floor, the judge said.

Nabil Cherif, the restaurant owner and head chef, told them he would get their cardboard box for them and when he did so bottles of beer fell from the bottom and smashed on the floor.

McCarthy picked up a broken bottle and made a punching motion at Mr Cherif. He shouted at him calling him a foreigner, telling him to go back to his own country and told him he was a dead man, Mr Justice Edwards said.

Mr Justice Edwards said McCarthy had a long standing alcohol and substance abuse problem. He had 129 previous convictions including convictions for assault and robbery. By any standard this was a serious instance of a threat to kill with numerous aggravating factors, Mr Justice Edwards said, including the use of a weapon, the fact customers had to leave the restaurant, the racist and xenophobic sentiments expressed and the long-term impact on the victim.

Mr Justice Edwards, who sat with Mr Justice George Birmingham and Mr Justice Alan Mahon, said the Court of Appeal found no error in principle and therefore dismissed the appeal.