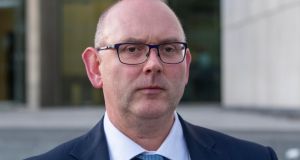 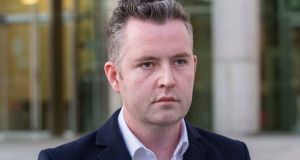 A garda has gone on trial charged with assaulting an RTÉ cameraman who was reporting on demonstrations by an “anti-Islamisation” group and anti-racist counter-protesters.

Garda Sean Lucey has pleaded not guilty to one count of assault causing harm to Colm Hand at Cathedral Street, Dublin city centre on February 6th, 2016.

Mr Lucey, with an address in south Dublin, also pleaded not guilty to damaging a camera on the same date.

Mr Hand was working alongside a reporter covering incidents between the opposing groups.

Opening the trial at Dublin Circuit Criminal Court on Monday, Fiona McGowan BL, prosecuting, told the jury of seven women and five men that on the day in question gardaí were on notice of a rally by an organisation called Pegida.

The jury heard the Pegida is an organisation which “promotes and supports the protection of the national identities” and is against what it “perceives as the excessive Islamisation” of European countries.

Ms McGowan said that gardaí ­ were also on notice of a counter-rally organised by the “anti-racism network in Ireland and other like-minded groups”.

She said gardaí­ intended on the day to prevent or deal with any confrontations between the two groups of opposing ideas.

Garda Sergeant Derek Fleming told the court that if the two factions met, there was a significant risk of violence. He said that Garda Lucey was detailed to a public order unit with six other members and that he was the sergeant in charge of the unit.

Each public order unit were detailed to a public order van and the vans were positioned in a holding area behind O’Connell Street. He said they were deployed to deal with an incident between members of the opposing groups at a shop on North Earl Street.

He said he later received reports of a number of “left wing protesters” gathering on Cathedral Street, with some of them putting on balaclavas and face masks. He said that some Pegida supporters had entered a pub on the street.

James Dwyer SC, defending, put it to the witness that the protesters did not intend to “have a clear-headed debate about immigration policy”.

Garda Sgt Fleming replied: “We were under no illusions, it was going to be violent.”

He said his unit and two other public order units went to the area. The members in these units were wearing “soft caps” and did not have helmets or shields.

Sgt Fleming said the gardaí ­ made a line across the street to stop the protesters reaching the pub. He said the crowd had swelled and became “extremely aggressive”.

He said he directed the gardaí­ in his unit to draw batons. He said about 15 men who had their faces covered by scarves and hoodies began to actively resist gardaí­.

Sgt Fleming said some protesters were struck with batons as they were a direct threat to safety and that anyone who was attacking gardaí­ had their faces covered.

The court heard that three more public order units, these “fully kitted out in riot helmets and shields” were deployed behind the “soft cap” units.

Sgt Fleming said the separation line was never breached and after about 30 minutes, the protesters dispersed.

He said that during this time the Garda members were verbally abused and were being filmed by the protesters.

He told Ms McGowan that the protocol for the use of force was that gardaí­ should use non-violent means to control or disperse the crowd and that force should only be used “as a last resort”.

He said batons could be used by a garda if they were in fear of being attacked or overpowered.

Ms McGowan said that as a result of the tense situation on Cathedral St., Mr Hand and the reporter made a certain decision. She said there was an incident involving a camera and Mr Hand was struck by a baton in the groin area and was only able to continue filming for only a very short time after that.

She told the jurors they would hear about the damage to the camera and the injuries to Mr Hand. She said she anticipated this was a case in which jurors would have to consider the circumstances in which a person was justified in using force.

The trial, which is expected to last five days, continues before Judge Melanie Greally.