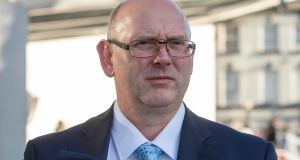 Garda Seán Lucey has been convicted of assaulting an RTÉ cameraman during street protests in Dublin three years ago. Photograph: Collins Courts.

A garda has been convicted of assaulting an RTÉ cameraman during street protests in Dublin three years ago.

Garda Seán Lucey was detailed on the day to a public order unit which was trying to to deal with confrontations between anti-racism protesters and supporters of a “far right group”.

The 42-year-old had pleaded not guilty at Dublin Circuit Criminal Court to one count of assault causing harm to Colm Hand at Cathedral Street in Dublin 1 on February 6th, 2016 and to damaging his camera.

Lucey, who has an address in south Dublin, has been stationed at Crumlin Village and Sundrive Road Garda stations during his career.

On the fifth day of the trial, the jury returned a verdict of guilty on the count of assault causing harm after deliberating for two hours and 46 minutes. The jury found Lucey not guilty of criminal damage.

Judge Melanie Greally thanked the jury for their attention and commitment to the case and adjourned the matter for sentencing on February 7th next. She remanded Lucey on continuing bail to that date.

During the trial, Mr Hand said he and reporter Colman O’Sullivan were sent to cover the anti-racism protests on O’Connell Street on the day.

He said he and his colleague followed people who were running towards Cathedral Street, where there was a confrontation between gardaí­ and protesters on one half of the road as a garda line was forming across the entire road.

Mr Hand said the scene was tense and that a garda went to use his baton and he began shouting to Mr O’Sullivan “back, back, back”. He said he was reversing and moving parallel to the garda line when he felt the camera being hit by a baton from behind.

“I turned to my right. I said, ‘you shouldn’t hit cameras’ or something like that,” he said.

Mr Hand said he was no longer looking through the camera eye piece and then saw someone coming out of the corner of his eye and was then struck in the groin by a garda. He recalled being in pain and only being able to continue filming for a very brief period. He said he saw the garda who struck him and took his badge number.

Garda Michael Dibley told the court that he was also part of the public order unit that day and was extremely concerned for the safety of himself and colleagues. He said the situation became extremely hostile and gardai were under pressure as the crowd got bigger.

He said had never encountered as hostile a situation in more than 10 years of duty and agreed that those attacking gardaí had their faces covered.

Garda Dibley said gardaí are meant to keep people at a distance of 6ft and could use their discretion to employ the baton if they felt someone was coming into that area, was a threat or was trying to force through their barrier. They were entitled to strike the upper arms or legs, he said.

In her closing speech to the jury, Fiona McGowan BL, prosecuting, said there was no question that footage taken on the day showed gardaí­ gesticulating and saying “get back”. She submitted that Mr Hand could be seen complying with that direction and retreating.

Ms McGowan told the jury they could see on the footage that when Mr Hand had retreated, Garda Lucey steps forward from the line and strikes him with the baton in his groin after first hitting his camera.

In his closing speech to the jury, James Dwyer SC, defending, told the jury that they must “leave at the door” any general views they may have good or ill towards An Garda Síochána. He said his client has a clean record of service to the State over almost two decades.

Mr Dwyer said a big issue in the trial was the lawful use of force. He said if Lucey honestly believed he was acting with lawful force, the jury must give him the benefit of the doubt on both charges.