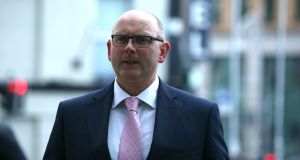 Garda Sean Lucey (42) has pleaded not guilty to one count of assault causing harm to Colm Hand at Cathedral Street, Dublin city centre on February 6th 2016 and to damaging his camera. Photograph: Collins Courts

An RTÉ reporter has told the trial of garda accused of assaulting a camera man during street protests that the defendant came forward from a line of gardaí­ to strike the alleged victim.

Garda Sean Lucey (42) was detailed to a public order unit to deal with confrontations between anti-racism protesters and gardaí­ who were trying to prevent protesters from getting to supporters of a “far right group”.

Garda Lucey has pleaded not guilty to one count of assault causing harm to Colm Hand at Cathedral Street, Dublin city centre on February 6th 2016 and to damaging his camera.

Mr Lucey, who has an address in south Dublin, has been stationed as a garda at Crumlin Village and Sundrive Road garda stations.

Colman O’Sullivan, a reporter with RTÉ said that he and Mr Hand were in the city centre to report on a demonstration by a “far right group” and a counter demonstration by “anti-racist” groups.

The jury heard that a cameraman is vulnerable in these type of public order crowd situations because he has one eye in the camera eye piece and the other eye closed to focus.

Mr O’Sullivan said his job is to be the camera-man’s eyes and to alert him to hazards. He said they went to a confrontation between gardaí­ and protesters on Cathedral Street where the atmosphere was very tense.

He said some protesters were quite angry as they wanted to get further down the street to pursue people from the opposing group. He said gardaí­ had formed to stop them moving down the street and some had drawn batons.

“They were indicating they wanted people to move back. At that stage we were retreating already. I said to gardaí, ‘we’re press and we’re getting out of your way’,” he said.

He said he and Mr Hand were moving across the garda line to get out of the confrontation area.

“A garda advanced out of line and hit Colm’s camera. I was very close to Colm. The baton hit the camera quite close to my head,” Mr O’Sullivan said.

He said he immediately pulled the cameraman away from the garda line. Mr Hand turned around to face the line of gardaí­ and said “don’t hit the f**king camera, you can’t hit cameras”.

He said the garda who had struck the camera then struck Mr Hand in the groin area.

“He was in advance of his colleagues and he came forward to strike Colm,” he said. He said Mr Hand said he was hurt and they left the area.

Under cross-examination he told James Dwyer SC, defending, that he and Mr Hand discussed the potential for conflict in advance of the job. He agreed they both had a clear understanding that there were two opposing groups and that “it was clear from the demeanour of this group that this meant business, there was going to be violent confrontations”.

He agreed that in a conflict situation you constantly assess the risk and if weapons appear or if crowd dispersal techniques are engaged, it would be appropriate to withdraw.

He said there would have to extreme, major unrest to begin considering a withdrawal to a building or an upstairs window.

“I don’t think I’ve ever had to do that in any of my assignments, covering public order incidents,” he said. The jury heard the reporter previously worked for the BBC in London and Belfast.

He told Mr Dwyer that neither he or Mr Hand had RTÉ logos or “press” logos on their clothes or on the camera.

Earlier, Mr Hand said he was reversing and moving parallel to the garda line when he felt the camera being violently hit by a baton from behind.

“I turned to my right. I said, you shouldn’t hit cameras, or something like that,” he said. He said he was no longer looking through the camera eye piece and he then saw someone coming out of the corner of his eye and was struck in my groin.

He said it was really painful and he was only able to continue filming for a very brief period. He said he saw the garda who struck him and took his badge number.

He said the screen of his mobile phone, which was in his front pocket, was smashed. He drove home and saw he had bruising across his leg and groin area.

Under cross-examination he agreed with Mr Dwyer that he said the words “you f**king animal” “when Garda Lucey hit me full force in the groin”.

Mr Hand denied that he had not complied with an order to move back.

Mark Malone who attended the anti-racism protest as a steward for the European Network Against Racism said he saw the camera being struck and there was a “bit of reaction and people were like: What was that about?”.

He said it seemed to be “slightly out of keeping with what was happening at the time”. He then saw the baton hit the lower part of the camera person’s body.

He then withdrew from the area and later provided his footage from a small camera he was using on the day to RTÉ. That footage was later passed on to the Garda Síochána Ombudsman Commission.

Garda Michael Dibley testified that he was also part of the public order unit that day and said he was extremely concerned for the safety of himself and colleagues. He said the situation was getting extremely hostile and gardaí were under extreme pressure as the crowd got bigger.

“I was in fear. I’d seen some colleagues have been disarmed. I’d seen colleagues getting punched and kicked. I feared for my own safety and my colleagues. We were completely outnumbered,” he told Mr Dwyer.

The trial continues before Judge Melanie Greally and a jury.