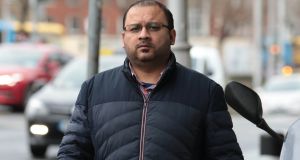 A former taxi driver’s personal injury claims for up to €120,000 have been thrown out by a judge, who told him his case had been a waste of court time.

Judge Jacqueline Linnane heard that Mohammed Noman Khan kept a 77-year-old distressed woman driver waiting for an hour on the Goatstown Road until gardaí­ arrived at the scene of what had been a “one mile an hour” rear ending of his taxi.

“You insisted on the gardaí ­ being called and wouldn’t even allow her to move her car before they arrived,” Mr Kearney told him.

Mr Khan (37), of Belarmine Plaza, Stepaside, Dublin, was told that an FBD Insurance investigator would give evidence of his having signed a statement in which he had stated he had not been injured.

Despite Mr Khan having denied that he had made such an admission, his legal team told Judge Linnane they had received instructions to withdraw his claim against Ms O’Grady, as well as a second claim he had made against another female driver for an incident two months later. Both incidents occurred in 2016.

Judge Linnane said Mr Khan’s credibility had gone completely and told him it had been a total waste of time in both his cases having been brought to court.

Mr Khan also withdrew his claim against Pauline Treanor for another low-impact collision that had occurred while he drove towards the airport on the Drumcondra Road.

In both incidents Mr Khan told the court he had suffered whiplash injuries.

He also told Judge Linnane he had settled a High Court case in 2011 for €12,500 for an incident at work but later conceded in cross-examination that he got nothing out of it as the settlement was used to defray legal costs.

Mr Khan said he had also settled a December 2014 road traffic claim for €7,000 and was currently considering whether or not he should take out a personal injury claim for an incident in April 2018.