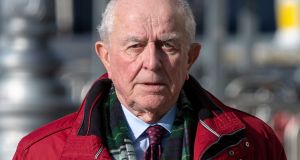 An elderly former school teacher convicted of fondling Dublin school boys five decades ago failed to show up for his sentencing after going into hospital.

Patrick Harte (78), who is on bail, failed on Monday in a legal bid to have his sentencing adjourned due to the Covid-19 pandemic and his own medical condition.

His lawyers told Judge Martin Nolan that he is avoiding crowded places and following HSE guidelines for people over 70 and should not be compelled to attend court.

Judge Nolan refused the defence application and listed the sentence hearing to take place out of hours at 4pm on Tuesday at Dublin Circuit Criminal Court, when the building would be relatively empty.

At this hearing, on Tuesday afternoon, Patrick Gageby SC, defending, told the court that Harte had subsequently been admitted to Tallaght hospital suffering from certain symptoms, including cardiac issues.

This followed him attending his GP. Some documents were handed into court to verify events.

Judge Nolan said the court was quite concerned and a little suspicious about this behaviour. He adjourned the case to Thursday and told Mr Gageby that the case “will be dealt with in this term” and preferably this week.

Harte, of Glendown Park, Templeogue, Dublin was a teacher at the primary school in the late 60s when the complainants were aged around ten. The trial heard he would fondle some of the boys after calling them to the top of the class.

Harte had pleaded not guilty and gave evidence during which he strenuously denied the allegations.

On Monday Mr Gageby outlined to the court how his client suffers from a number of medical conditions, including diabetes and chronic heart disease.

Mr Gageby submitted his client should not be compelled to attend court, given the current situation. He noted that there were quite a number of people present in the court complex. He asked that the sentence be adjourned for two months.

Anne Rowland SC, prosecuting, opposed the application. She said five of Harte’s seven victims had attended court and wished to read out their victim impact statements.

“This is a case in which the interest of justice would be served by some finality at this stage,” she said, noting the offences date back to the 1960s.

Ms Rowland said the injured parties would be willing to stay outside the court for the duration of the sentence hearing and come in one by one to read their victim impact statements.

Judge Nolan noted Harte’s health is currently stable, but that his medical conditions render him vulnerable to coronavirus.

However, he noted that “the virus will be with us for a considerable period of time” and said that Harte must be sentenced for his crimes.