The former chairman and chief executive of Anglo Irish Bank, Seán FitzPatrick, has been acquitted on all charges against him at the Circuit Criminal Court. Video: Colm Keena 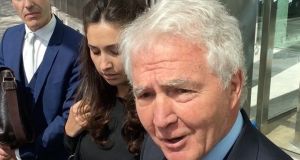 The judge in the trial of the former chairman of Anglo Irish Bank Seán FitzPatrick is to direct his acquittal.

The development came as Judge John Aylmer strongly criticised the investigation by the Office of the Director of Corporate Enforcement (ODCE).

He opened a lengthy ruling by announcing his decision, promoting an emotional gasp from Mr FitzPatrick’s daughter Sarah, who was in court. Not to declare his decision at the outset, he said on Tuesday, would be a “further unfairness”.

Mr FitzPatrick (68) looked straight ahead and listened as the judge strongly criticised the ODCE. It emerged last year that documents relevant to the case had been shredded by ODCE solicitor Kevin O’Connell, who later sought medical treatment.

Mr O’Connell played a lead role in the investigation, but had no previous experience of investigating indictable offences. The investigation fell short of the duty to seek out evidence as to a person’s innocence as well as their guilt, the judge said.

He was giving his ruling following a submission from the defence that the charges be withdrawn. The jury is to return on Wednesday to be told of the development.

He paid tribute to his legal team and also said he appreciated the media’s restraint during the current trial, adding: “I would hope that my privacy and that of my family is respected in the coming days.”

Mr FitzPatrick of Whitshed Road, Greystones, Co Wicklow, had pleaded not guilty to 27 offences under the 1990 Companies Act. These included 22 charges of making a misleading, false or deceptive statement to auditors and five charges of furnishing false information in the years 2002 to 2007.

It was the prosecution’s case that multi-million euro loans taken out by Mr FitzPatrick and his family were “artificially reduced” for a period of two weeks around the bank’s financial end of year statement by short term loans from other sources, including Irish Nationwide Building Society (INBS).

The prosecution alleged Mr FitzPatrick failed to disclose the extent of these loans to the bank’s auditors in the years 2002 to 2007. Mr FitzPatrick had denied all charges.

Judge Aylmer said a fundamental error was made when statements were being taken from witnesses Vincent Bergin and Kevin Kelly, who were audit partners with EY, auditors to Anglo Irish Bank.

At the time the financial services firm was aware that it was being investigated by its regulatory body, Carb, and was being sued by the IBRC, in relation to matters linked to Anglo. The ODCE assured the firm that as part of its inquiry into Mr FitzPatrick, it would not be investigating the adequacy of its audit of Anglo.

The process of taking the statements took two years and involved EY’s solicitors, A&L Goodbody. It was more in the manner of preparing an affidavit for a civil action, than witness statements for a criminal trial, the judge said.

The ODCE adopted an “inappropriate, biased and partisan” approach, the judge said. It was trying to “build and defend” a case against Mr FitzPatrick rather than investigate the alleged crimes.

The preparation of the witness statements involved coaching and cross-contamination, the judge said.

The trial began in Dublin Circuit Criminal Court last September and was scheduled to end by Christmas.

It was delayed by weeks of legal argument in the absence of the jury and only began hearing evidence in December.