Driver ‘panicked’ and drove away after hitting cyclist 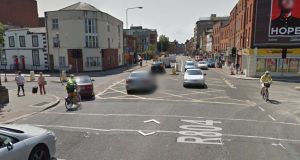 An inexperienced driver’s failure to properly observe oncoming traffic led to a collision with a cyclist which left the victim seriously injured, a court has heard.

Melvin Rattigan, who was 18 years old at the time, did not have a full driving licence or insurance for the vehicle he was driving and left the scene after the collision.

Rattigan, now aged 20, told gardaí he “panicked” when he hit the cyclist and drove off. He said he had not heard or seen a taxi driver who followed him and indicated he should return to the scene.

The cyclist, Laura Briggs, who had been cycling home from work at lunch time, was left with serious injuries including a hairline fracture to her skull. She said in her victim impact statement that she has ongoing effects from her injuries and suffers from depression.

Garda Niall McCormack agreed with defence counsel, Anne Marie Lawlor, that at the time of the incident both parties had a green light, but Ms Briggs had the right of way as Rattigan was attempting to make a right turn from Dorset Street onto Dominick Street.

He agreed that Rattigan took the turn on the green light, not observing that there was a cyclist in oncoming traffic.

Rattigan told gardaí that he thought Ms Briggs had got back up and was OK after the collision. He said he had “absolutely panicked” and driven off. He said he did not hear a taxi driver who had followed him to tell him to go back to the scene.

Ms Lawlor said Rattigan felt huge regret and was shocked that Ms Briggs had been injured in the way she was. She said Rattigan had been an inexperienced driver who did not observe oncoming traffic as he should have.

She asked the court to take into account the serious effects the offence has had on the victim, but to have regard to this young man and leave him in the community.

Judge Karen O’Connor said the offence has had a serious effect on a woman who had been going about her business in the early afternoon. She noted Rattigan had entered an early guilty plea.