Doctor jailed for not paying almost €100,000 in income tax 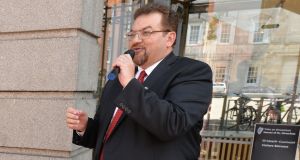 Bassam Naser (51), of Howth Road, Sutton, pleaded guilty at Dublin Circuit Criminal Court to two charges of delivering an incorrect return in connection with his income tax affairs for the years 2006 and 2007.

The court heard that Naser had a hidden bank account into which he lodged 1,686 cheques received from patients attending his clinic. He was due to pay almost €100,000 in income tax and now owes a further €200,000 in penalties and fees. He had a €100,000 cheque in court to pay the overdue tax.

On Tuesday, Naser’s wife stood in the body of the court crying and asked Judge Martin Nolan for “mercy” as evidence was heard. She was then escorted out by her husband. The judge had adjourned the case overnight to consider the matter and had remanded the doctor on continuing bail.

Sentencing Naser on Wednesday , the judge said the offences were serious.

“An efficient and good tax system is vital to a good society” he said, adding that it allowed for much needed services to be provided to the community.

He said Dr Naser “failed abysmally” and was “morally reprehensible”.

“He is a very intelligent man. He knew what he was doing was wrong. He created a mechanism to avoid paying his taxes,” Judge Nolan continued.

The judge also noted that Revenue was reliant on the honesty of people who are self-assessed.

He acknowledged that Naser had “excellent mitigation” and accepted that there were “multiple impressive references from his patients”. He said that Naser was a good doctor and an advocate for his patients and that he was a community man who continued to do charity work for his native Palestine.

Judge Nolan said he was conscious of the doctor’s family circumstances and the fact that he had repaid €100,000 to Revenue but added “he knew what he was doing and yet he persisted”.