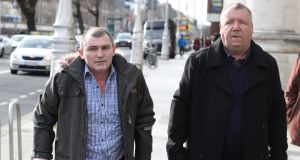 A news vendor, whose staff pin-pointed the whereabouts of double murderer Malcolm Macarthur for gardaí­ 35 years ago, will find out on Friday if his newspaper stand can remain at the entrance to Dún Laoghaire Shopping Centre.

Judge Francis Comerford was to have delivered judgment on the legalities of George Davis’s news stand at the centre on Tuesday, but adjourned his decision for further consideration until Friday.

A former employee of Mr Davis, now retired in Co Tipperary, recognised Macarthur when he bought a newspaper from one of Davis’s two news stands at the shopping centre in 1982. He and Davis tipped off the gardaí that Macarthur was hiding somewhere in Dún Laoghaire.

Gardaí, led by Det Sgt John O’Mahony, who later became head of the Criminal Assets Bureau and is currently an Assistant Commissioner, set a trap for the killer and eventually arrested him in the home of the then Attorney General Paddy Connolly who died in January last year.

Macarthur later admitted the murder of 27-year-old nurse Bridie Gargan who had been sunbathing near her car in the Phoenix Park. While on the run, Macarthur shot dead farmer Donal Dunne, in Edenderry, Offaly.

Mr Davis, of Hadleigh, Ballybride Road, Rathmichael, Dublin, spent a day in the Circuit Civil Court last week resisting a bid by Dún Laoghaire Shopping Centre owners Coltard to have his mobile news stand banned from the entrance of the centre.

He has been selling newspapers around the shopping centre and other areas of Dún Laoghaire for almost 40 years. Barrister Raymond Delahunt, who appeared with Baily Homan Smyth McVeigh solicitors, told the court Davis at best only had a licence to sell papers that could be revoked at any time.

Coltard claimed it had received a complaint from a shopping centre tenant about Davis’s trolley-type news stand attracting third parties, including cigarette smokers, congregating around it and causing an obstruction and potential fire risk.

Barrister Mark O’Riordan, who appeared with Kenny Sullivan Solicitors, for Davis, claimed that, in the late 70s, during legal proceedings involving the previous owners of the centre, a compromise had been reached allowing Davis a life-long contract to sell papers at the entrance to the centre.

Coltard, which acquired the centre in 1998, plans a €10 million redevelopment of the centre involving the creation of two large anchor stores fronting on to Marine Road and on to George’s Street.

Mr Davis said on Tuesday at the adjournment of Judge Comerford’s judgment that when news of his legal battle with the owners broke at the weekend it went viral on the internet and led to 30,000 emails from all over the world from former customers supporting him.

He said public protests were being planned by others.