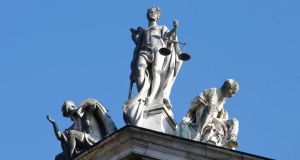 Judge Jacqueline Linnane said she was satisfied that all bank documents relating to the proceedings were in order and that Anthony and Miriam Freeman’s home on Navan Road in Dublin was the security given against the mortgage. Photograph: Michaela Rehle/Reuters

A Dublin couple who, according to a judge, once owned six houses and blew more than €500,000 on themselves in a spending spree, lost their upmarket family home on Thursday.

Mr Donnelly, who appeared with solicitors Hugh J Ward, said the Freemans had not made any repayments since July 2013.

Anthony Freeman, who was not legally represented, told the court his wife could not attend because of illness and they were disputing the amount being claimed by the bank.

He said orders made by Mr Justice Brian McGovern in the High Court over their challenge to the appointment of a receiver over their other properties were under appeal to the Supreme Court.

Judge Linnane said the Freemans had been given a final opportunity to save their home and she was satisfied that all bank documents relating to the proceedings were in order and that 44 Villa Park Gardens was the security given against the mortgage.

She made an order for possession against the Freemans and granted them a stay of three months to facilitate their finding alternative accommodation.

Ulster Bank recoveries outsources manager Laura Carroll said the bank wanted vacant possession of the house to facilitate a sale of the property.

Earlier, Mr Donnelly had told the court that the Freemans in this case were repeating issues made in a High Court commercial investment case against Bank of Scotland, all of which had been rejected by Mr Justice McGovern.

Mr Justice McGovern had stated in his judgment that the couple had bought, between 1996 and 2006, six houses in Dublin, at Huntstown Drive, Huntsdown Wood and Willow Wood, Blanchardstown; Ventry Drive and Drumcliffe Drive, Cabra West; and Dunsink Green, Finglas.

He said this had been financed by First Active Building Society and later remortgaged with Bank of Scotland for €1,406,000. When the First Active debt had been paid the couple had been left with a surplus of more than €546,000, which they had spent on themselves over a period of 16 months.

Mr Justice McGovern said the evidence before him clearly showed that the Freemans had gone on a spending spree with the surplus, both buying expensive cars and having at least one holiday in the United States, drawing down just under $60,000.

He said Miriam Freeman had been unable to explain why so many substantial cash withdrawals had been made and why the money had not been applied towards the investment property business.

The judge said both of the Freemans had furnished misleading information to Bank of Scotland at the time they applied for the loans, grossly inflating the net profit of Mr Freeman’s window-cleaning business, which gave them only a modest income.

Mr Justice McGovern, who threw out all of the issues raised by the Freemans in their High Court action against Bank of Scotland and its receiver, said the couple had sought to invalidate the appointment of the receiver over the sale of their investment properties. It is Mr Justice McGovern’s decision that has been appealed to the Supreme Court.