Boy who cut eyebrow in fall at Dublin crèche awarded €32,500 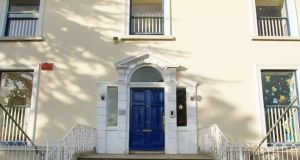 The Wee Care crèche in Monkstown, Co Dublin has settled a damages claim for €32,500.

A two-year-old boy, who fell and lacerated his left eyebrow while washing his hands in a créche bathroom, has been awarded €32,500 damages against Wee Care Limited, Monkstown, Co Dublin.

Barrister Samantha Cruess Callaghan, counsel for Lucas Murphy, who is now seven years old, told judge John O’Connor in the Circuit Civil Court on Tuesday the boy had been standing on a footstool while washing his hands at a sink too high for him to reach.

Counsel, who appeared with solicitor Rose Sweeney of Coleman Legal Partners, said Lucas, of Ashgrove, Kill Avenue, Dun Laoghaire, had been standing on a plastic stool while washing his hands and had fallen off, striking his forehead against the toilet bowl.

Ms Cruess Callaghan told the court the incident happened due to negligence on behalf of the crèche which had made the boy a settlement offer of €32,500 damages which the judge approved.

She said Lucas had been two-and-a-half at the time and had been attending the Wee Care Creche. He had been left with a horizontal scar, still visible at conversation distance, in the middle of his left eyebrow.

The judge heard that Lucas, on the day of the incident in October 2014, had been in great distress and had been brought by ambulance to Tallaght Hospital. Following transfer to Our Lady’s Children’s Hospital, Crumlin, the wound had been treated by the application of adhesive tape.

Ms Cruess Callalghan said Lucas had been reviewed on three occasions at the hospital’s day care unit up until January 2015. The wound had properly healed but he had been left with a two centimetre long scar.

Lucas had sued Wee Care Limited through his father Darren Murphy and had been offered €32,500 damages by the owners of the créche. Ms Cruess Callaghan said she was recommending the court approve the offer as adequate compensation for the boy’s injury.

Judge O’Connor, on being told the boy’s mother considered the offer to be on the light side, said he considered €32,500 in the circumstances to be very reasonable and made the settlement a rule of court.