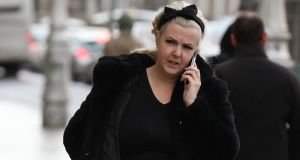 A 12-year-old schoolboy, who broke his left arm while travelling upwards on an escalator in Dunnes Stores at Dublin’s St Stephens Green, was awarded €35,000 in the Circuit Civil Court on Monday.

Barrister Conor Kearney told Judge John O’Connor that Dunnes had initially refused to accept an Injuries Board assessment of €35,000 and the company had entered a full defence to the claim.

Mr Kearney, who appeared with Keith Walsh Solicitors for Mason Sarsfield and his mother Sarah Sarsfield, through whom he brought his claim, said that following an inspection by a forensic engineer, the store had now accepted the figure and was agreeing to the settlement assessment of €35,000.

He said Mason, who was seven at the time of the August 2014 accident, had been ahead of his mother at the time and no-one had actually witnessed the exact cause of the injury. As a result of the engineers report and two sets of discovery proceedings the claim was eventually resolved.

Mr Kearney said Mason, of Aughavannagh Road, Crumlin, Dublin 12 had been taken to Crumlin Children’s Hospital where his fracture had been manipulated under general anaesthetic and a plaster had been fitted which he had to wear for five weeks.

He told the court that medical reports revealed Mason had made a full recovery with no suspected risk of developing arthritis.

Judge O’Connor said he considered the settlement a good one and approved the offer. Exactly a month before Christmas 2025, Mason will be able to withdraw the €35.000 with gained courts interest as he reaches his 18th birthday.