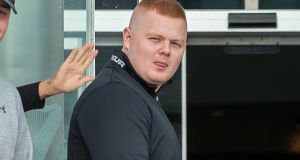 A father of three who threw a punch at a man as he was leaving a courthouse leading to “a volatile situation” which needed the assistance of 20 gardaí­ “to calm it down” will be sentenced later.

Garda Richard Finan said that he was standing outside the main entrance to Blanchardstown District Court when he saw Devon Hennessey (24) approach another man and punch him in the face “without prior warning or provocation”.

Garda Finan told Elva Duffy BL, prosecuting, that he was aware at that time, that there were “background issues” between Hennessey and this other man and he immediately intervened and tried to restrain Hennessey.

He said Hennessey resisted him and tried to go back to the other man shouting at him “you are a dead man”.

A number of other gardaí­ had to assist to continue to physically restrain Hennessey, while other associates of his tried to get involved in the situation.

Garda Finan agreed with Ms Duffy that “15 to 20 members of gardaí­ were needed to calm down the situation that became increasingly volatile”.

He accepted there were ongoing threats made by other individuals to this man while Hennessey continued to shout both at the man and gardaí­ as he was being placed in the patrol car.

Oisin Clarke BL, defending, told Judge Melanie Greally that his client claims that the man made “a vile comment” about Hennessey’s son which “sparked this off”. He handed in a letter to the court from Hennessey which he said outlined the comment the other man made.

He said his client is a father of three and his son has a disability which leads to him becoming tired and requires Hennessey to carry him. He said Hennessey is not working at the moment and cares for his family full time.

Garda Finan agreed with Mr Clarke that Hennessey initially told him that the other man had made some comment to him about his son but said that Hennessey didn’t say anything else about this comment when given the opportunity to do so during Garda interview.

Mr Clarke described it as “an unfortunate incident that obviously got out of control”.

He said his client “reacted in the heat of the moment” and accepted that his behaviour led to the overall incident.

Judge Greally asked Garda Finan if there was “currently hostility between the parties”.

“The other side of the factions have moved away from the area. I don’t believe there has been any more incidences,” Garda Finan replied.

Judge Greally adjourned sentencing to May 5th next and ordered a report from the Probation Service to establish if Hennessey would be suitable for community service. She said she appreciates that Hennessey has “a substantial commitment to his family”.