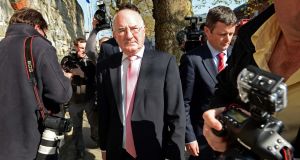 Willie McAteer, former finance director of Anglo Irish Bank, has been here before, sitting in the Criminal Courts of Justice looking up at Judge Martin Nolan, waiting for Friday’s sentencing.

He has the same barrister as 2014, Patrick Gageby SC, and the prosecuting counsel, Paul O’Higgins SC, is the same. His co-defendants are different, though.

Two years ago he was found guilty of providing illegal loans to businessmen to buy shares in Anglo. Judge Nolan sentenced him to 240 hours of community service, in lieu of two years in prison.

His current conviction involves a circular scheme, with billions of euro being moved from Anglo to Irish Life and Permanent and back again.

The aim was to make Anglo look healthier financially than it actually was.

The former group chief executive of Irish Life and Permanent plc, Denis Casey (56), sat separately and at right angles to the other two.

Bowe’s brother-in-law John Fearon, a former director general of Civil Aviation, spoke passionately of the good husband and father, his charitable work at Sunshine House and the Merchant’s Quay Project, and the respect for him in the community.

Mr Fearon said he would hate to know his brother-in- law through the Anglo tapes played in court, telephone recordings that attracted much criticism for their tone.

He could recognise Bowe through his laughter and jokes; he joked under pressure and his sense of humour could be quirky and a bit irritating, “but it is not an indication of the man himself”.

Among other character witnesses was former Army officer Denis Hevey.

He sat erect in the witness box and told the judge he knew Casey since 1995.

They were both involved in the Insurance Institute of Ireland – Casey was president and he was chief executive. He was “very committed” and “very ethical”, Mr Hevey said.

“He always had the height of integrity and gave his time quite generously.”

Mr O’Shea said McAteer and his wife had sold their Dublin home and now lived modestly in a bungalow in Tipperary.

Mr Gageby later said McAteer joined Anglo in 1992 when it was a small operation. When David Drumm took over as chief executive in 2005, he could have left, but he was asked to stay on and felt it was his duty.

At one stage, he had shares in Anglo worth tens of millions of euro, “commensurate with great wealth”, Mr Gageby said.

If he had retired in 2005 and sold the shares, he would not be living the modest life.

“His conviction was a poor end to his career.”