Action against Garda Síochána, State over reputation damage can proceed 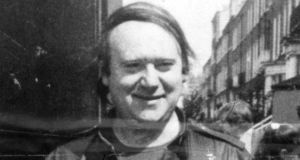 Garda Chief Superintendent Paul Smyth and his brother, businessman Philip Smyth, who claims he risked his life meeting Dublin gangster Martin Cahill (pictured) to help gardaí recover stolen paintings, are entitled to proceed with their action for damages against the Garda Commissioner and State, the High Court has ruled.

Garda Chief Superintendent Paul Smyth and his brother, businessman Philip Smyth, who claims he risked his life meeting Dublin gangster Martin Cahill to help gardaí recover stolen paintings, are entitled to proceed with their action for damages against the Garda Commissioner and State, the High Court has ruled.

The brothers claim their reputations were damaged because gardaí failed to properly investigate their complaints dating from 1988 about malicious phone calls to gardai, the UK police and others falsely alleging they were involved in serious crime with subversives and others. Paul Smyth also claims this led to his being passed over for promotion to the rank of Assistant Commissioner numerous times.

Mr Justice Michael Peart today dismissed a pre-trial application by the defendants to halt the case on grounds alleging it is doomed to fail because of various High Court decisions that An Garda Síochána owes no duty of care requiring it to investigate, fully or at all, complaints made by persons to it.

Both brothers alleged their case is exceptional on grounds including they had a special relationship with the gardaí under which they were owed a duty of care arising from Paul being a Chief Supt and Philip’s assistance with undercover Garda operations including to recover valuable paintings stolen from a judge and from the home of Sir Alfred Beit.

Philip Smyth said his assistance sometimes placed him in considerable personal danger and necessitated many trips across the border into Northern Ireland. Paintings stolen from a judge’s home were recovered in large part due to his bravery, he claimed.

He claimed gardaí asked him to demand a personal meeting with Dublin criminal Martin Cahill rather than subordinate members of Cahill’s criminal gang. Although gardai assured him no such meeting would happen, Cahill contacted him and they did meet a number of times, he claimed.

Mr Smyth alleged he was acting at all times under direction of gardai and various meetings led to him eventually travelling to Antwero to “inspect” stolen paintings recovered shortly afterwards.

He claimed details of the operation were leaked to deceased journalist Veronica Guerin who wrote an article referring to a “Dublin hotelier” which, he claimed, was sufficient for criminals to identify him as having assisted gardaí all along. During this time, gardai told him a number of times his life was in danger, he said.

Mr Justice Peart said it could not be unequivocally said the brothers’ case was doomed to failure. There may be exceptions to the defendants claim the Garda force has blanket immunity from being sued over alleged failure to investigate complaints and the court should not undervalue the importance peope attached to their reputations, he said.

He noted Professor Dermot Walsh, in an article considering liability for Garda negligence in preventing and invetsigating crime, had said some recent cases suggested scope for re-evaluating the strict application of principles in a 1989 English case (the Hill case) to the effect, unless there are special circumstances, police investigating crime owe no duty to protect individuals from the criminal behaviour of others.

Prof Walsh also said the fact Hill was not adhered to in some recent English cases made it “all the more puzzling” the Irish High Court, in a number of decisions, had embraced the Hill policy-based exclusion in “such an unquestioning and unadulterated form”.

Earlier, the judge noted the brothers allege the defendants acted negligently and in breach of duty in how they investigated the brothers complaints but did not allege any bad faith in that regard.

Philip Smyth clained there was no proper investigation into (1)anonymous false information given to gardai which lead to a search of his then premises, Sachs Hotel, Dublin, in September 1988; and (2) the falsity of and persons responsible for anonymous phone calls made to the London Metropolitan Polce between 1992-1995 alleging serious crimes of a subversive nature against him and Paul, including alleged complicity in drugs trafficking and a money-laundering operation on behalf of the IRA through his companies.

The judge noted earlier proceedings by Philip Smyth led to a High Court finding in 2002 that Caroline Devine, a director of a company of former meat baron Hugh Tunney, made phone calls maliciously on behalf of Crofter Properties Ltd, (which was involved in litigation with Mr Smyth’s company, Genport Ltd), and Genport was awarded substantial damages.

Philip Smyth claimed, through his own efforts and at great expense, he established certain calls were made by Ms Devine from Classiebawn Castle, Co Sligo, home of Mr Tunney, but gardai had not sought to interview either her or Mr Tunney.

The brothers allege an investigation into their complaints by Det Supt Noel Conroy, later an Asst Commissioner, was deficient and he and other investigators failed to deal with key aspects of the hoax calls. Paul Smyth claims the alleged failure to properly investigate resulted in his being denied promotions he would have otherwise got given his “exemplary record and qualifications”.