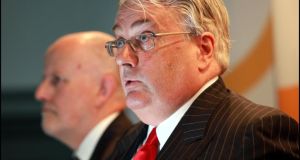 The Court of Criminal Appeal has quashed the conviction and ordered the retrial of a 33-year-old man who was jailed for life for murdering the man he suspected of having an affair with his wife. Mr Justice Frank Clarke said the court was not satisfied that the issue was “adequately remedied”. Photograph: Brenda Fitzsimons/The Irish Times

The Court of Criminal Appeal has quashed the conviction and ordered the retrial of a 33-year-old man who was jailed for life for murdering the man he suspected of having an affair with his wife.

The three-judge court today found that there was a “very real risk of injustice” in the manner in which the central question of provocation was explained to the jury by the judge in the trial of Shahzad Hussain.

In July 2012 Mr Hussain, with a last address of Woodland Avenue, Mosney, Co Meath, was also sentenced to seven years for seriously injuring his wife and two years for assaulting her.

Mr Hussain had pleaded not guilty at the Central Criminal Court to murdering his wife’s cousin and his own distant relative, Muhammad Arif (32), on January 7, 2011. He had also denied assault causing harm to Rashida Bibi Haider (44) and to intentionally or recklessly causing her serious harm.

It was alleged that Mr Hussain stabbed both victims in their livers on January 6, 2011 at Mr Arif’s apartment in Fitzwilliam Court, Dyer Street, Drogheda, Co Louth.

Ms Haider underwent life-saving surgery that day, but Mr Arif, a father-of-three and a security guard, died in hospital the following day

The court heard evidence that all three, who were originally from Pakistan, had lived together in Fitzwilliam Court.

However, difficulties arose in the arranged marriage of Ms Haider and the accused, after he began to suspect that she was having an affair with her cousin. Both husband and wife moved out separately in December 2010.

The case Mr Hussain made was that he had come across his estranged wife and Mr Arif in circumstances suggesting they were having an affair. He sought to argue at trial that as a result of such provocation he lost his self control to such an extent it would have justified a jury finding him guilty of manslaughter rather than murder.

Provocation operates as a partial defence which can reduce a charge of murder to manslaughter in situations where the accused suffers a sudden and temporary total loss of self control in response to provocation and commits the wrongful act in those circumstances.

In a written judgment delivered by presiding judge Mr Justice Frank Clarke, the appeal court said it was common case that the initial charge to the jury by Mr Justice Barry White incorrectly stated the law on provocation.

Mr Justice Clarke said the court was not satisfied that the issue was “adequately remedied” by a recharge by the trial judge or by the answers given by the judge to a question from the jury foreman.

The judge had been asked by both the prosecution and the defence at trial to recharge the jury on the question of provocation.

In those circumstances he said the court proposed to allow the appeal and to direct a retrial.

Mr Justice Clarke said the court would remand Mr Hussain in custody to the next list to fix dates of the Central Criminal Court, a date which should be notified in writing to both the prosecution and defence.