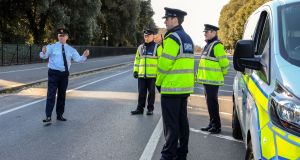 Two of the Garda’s most senior officers will now stay on in duty past their planned retirement dates to help deal with the ongoing coronavirus pandemic.

While the move to extend the tenure of Assistant Commissioner John O’Driscoll by two years, to June 2020, is not unprecedented, it is unusual.

However, senior sources in the Garda said there was “relief” he was remaining on considering the challenges now faced during Covid-19 and his experience in leading the fight against organised crime.

Assistant Commissioner Pat Leahy, who is in charge of policing in Dublin and was due to retire shortly, has also offered to remain on in the force until June due to the Covid-19 crisis.

Mr Leahy is a highly respected officer and retaining his experience, especially relating to the management of policing in Dublin, is seen as a major coup as the Garda force is braced for the worst of the coronavirus outbreak.

“They are both very experienced people and they are the kind of members you want to keep in these senior positions considering all the uncertainty we are facing,” said one source.

Both assistant commissioners applied for the post of the Garda commissioner almost two years ago and made it into the final stages of the competition, the result of which was the appointment of Garda Commissioner Drew Harris.

The news that Mr O’Driscoll and Mr Leahy will remain on comes just days after three senior officers were told they had won a recent recruitment round to select the next officers due for promotion to assistant commissioner level. Those three appointments will still take place as one assistant commissioner post has been vacant for some time, Mr Leahy will still retire in June and Assistant Commissioner Michael O’Sullivan retired on Tuesday.

The current head of the Criminal Assets Bureau, Det Chief Supt Pat Clavin, will be promoted to one of those posts and Chief Supt Ann Marie Cagney who commands the Dublin East Division to another.

PSNI Det Chief Paula Hilman was the third successful candidate and will join the Garda from the PSNI.

When the Covid-19 crisis emerged Mr Harris opened up the possibility that senior officers due to retire over coming months would remain on to bolster the strength of the Garda and retain experience.

A large number of officers have agreed to remain on, with Mr O’Driscoll and Mr Leahy the most senior.

Mr O’Driscoll was due to retire on age grounds in June but Mr Harris asked Minister for Justice Charlie Flanagan to increase his retirement age, which can be done under the Garda retirement regulations.

Mr Flanagan has agreed to this and it means Mr O’Driscoll will now be permitted to work as a Garda officer for two additional years, until June 2022.

He leads Special Crime Operations which includes having overall responsibility for the Garda units that fight organised crime.

Mr O’Driscoll has in recent years been a key figure in the successful policing operation against the criminals involved in the Kinahan-Hutch feud and in large-scale drug trafficking. He was also to the fore in charting the Garda’s response to increasing burglary rates.

The crime data for last year, which was released by the Central Statistics Office, showed last year’s burglary rate had fallen to an all-time low in the period since 2003 when the CSO began compiling the Garda’s crime statistics.