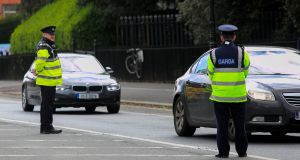 Garda checkpoint in the Phoenix Park due to Covid-19: we are moving towards hard paternalism. Photograph: Gareth Chaney/Collins 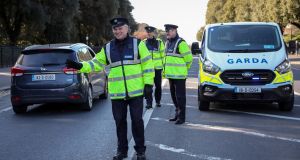 Gardaí in the Phoenix Park: they must be seen to enforce the movement-restriction rules evenly but with discretion. Photograph: Crispin Rodwell

Until now the State has been employing what behavioural scientists call “soft paternalism” in its approach to coronavirus – urging rather than ordering people to stay at home for the good of their fellow citizens.

Even since the announcement of new restrictions by the Taoiseach nearly two weeks ago (on Friday, March 27th), gardaí have been requesting people to not undertake unnecessary journeys, instead of threatening them with punishment for doing so.

In fact, until last night and despite their many checkpoints and patrols, gardaí had no powers to punish people not heeding the advice because Minister for Health Simon Harris had yet to sign regulations granting enforcement powers .

Harris signed the regulations last night and when he did, the authorities moved into the next phase: hard paternalism.

By any measure, the Garda’s new powers will be draconian; in normal times people would justifiably compare them to the powers of a police state. Those who do not comply with the regulations, by making non-essential journeys or simply loitering on the street, could face arrest, a fine of €2,500 and up to six months in prison.

Striking the right balance between persuasion and coercion has been to the fore of Government thinking since the start of the crisis, says Dr Pete Lunn, a behavioural scientist with the Economic and Social Research Institute (ESRI) and a member of the National Public Health Emergency Team’s behavioural change subgroup.

The Government’s stated aim is not to have to use its new powers of coercion. But if and when they are used, they must be deployed in such a way as to re-enforce social solidarity, not undermine it, he says.

A €2,500 fine and maximum six months’ sentence might seem too harsh or too soft depending on your viewpoint. But, from a behavioural science point of view, it is not the severity of the punishment that matters, so much as its mere existence.

“It often doesn’t take much punishment to bring a lot of people in line,” says Lunn. “Even the prospect of a garda asking you if you should be outside can be a deterrent. And that doesn’t only make you worry about being punished, it makes you question your own actions as well.”

When gardaí receive their new powers, they will have to strike a difficult balance; they must be seen to enforce the rules evenly but also with discretion. A video on social media of a pensioner being arrested for sitting on her porch will do little for public morale. On the other hand, groups of young men drinking cans in the street with impunity will only make those abiding by the rules wonder why they should bother.

Over the past week, a number of gardaí who have spoken to this newspaper have expressed concern about the difficulty in walking this tightrope and the training they will receive.

Garda overreach or clumsy applications of the law could have a disastrous affect. We saw evidence of this in the UK last week, when police prosecuted a woman under the wrong section of their new emergency legislation and were forced to ask for the case to be thrown out.

There has already been a small number of reports of overenthusiastic policing here. For example, solicitor Gareth Noble says he is aware of parents travelling to see their children as part of court-ordered visitation being told to go home by gardaí because they were taking non-essential journeys.

“These things will have to be looked at on a case-by-case basis,” he says. “Restrictions have to be proportionate and necessary.”

The rushing of hundreds of trainee gardaí into service after only a few weeks in Templemore raises the risk of mistakes being made.

“We need to use these powers carefully,” Lunn says. “There is evidence that where punishment is perceived to be disproportionate or unfair, it can backfire. Where people feel like they’re genuinely being treated unfairly, they will protest and they will often misbehave.”

The Government’s most effective tool in policing compliance is arguably not the Garda at all, it is public disapproval. Social opprobrium, whether taking the form of a social media post or a dirty look for not obeying the two-metre rule, is very effective at changing behaviour, experts say.

Lunn says about one in eight people will put their own interest above the collective struggle in crisis situations.

“Of that group, quite a large number of them will change their behaviour if they know that they’re going to be on the receiving end of social disapproval.”

In other words, the much-maligned “call-out culture” we’ve been hearing about for the last few years might serve a valuable purpose, at least in the current crisis.

Generally speaking, compliance with emergency regulations, especially severe ones, will degrade over time. The worry here is there will be a snowball effect, that a small number breaking ranks could cause others to question their compliance. Perhaps the current fringe conspiracy theories circulating on social media claiming the virus is a hoax or caused by 5G signals might start to gain a foothold.

How long before this happens? “The truth is I don’t know,” Lunn says. “One of the things that’s tricky about these things is they are quite unstable. If a significant number of people start breaking ranks, more will start to follow.”

Right now there is little evidence of this happening and, according to Lunn, history shows it is possible to “sustain generosity and sacrifices for long periods of time, provided everyone sees everyone else is doing the same”.