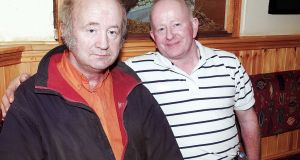 Brothers Willie and Paddy Hennessy in 2009. The brothers were found dead in a suspected murder-suicide in north Cork. Photograph: Seán Burke/Provision

Gardaí remain at a loss to explain what prompted a man (59) to kill his two older brothers in a frenzied attack with an axe at their small holding near Mitchelstown in north Cork.

Investigators have spoken to relatives and neighbours of Willie (66), Paddy (60) and Johnny Hennessy (59) to see if anyone knew of any issue or disagreement among them that would have led Johnny to kill his brothers at their holding at Curraghgorm near Mitchelstown.

No one has been able to offer gardaí any explanation for what might have triggered the row. Both older brothers were left dead, in or near a timbering shed on Thursday, after they suffered severe head injuries consistent with repeated blows from an axe found nearby.

Gardaí are waiting to obtain medical records for Johnny Hennessy but it is understood he may have only rarely, if ever, visited a GP. The indications from preliminary inquiries suggest there is no reported evidence of him suffering from any mental health condition.

“There is no serious mental issues or psychotic episodes documented that we can tell at this stage,” said one informed source. The source said while gardaí may be able to piece together the sequence of what happened they were less confident that gardaí will ever establish why it happened.

“It is just baffling. Family and friends don’t know what triggered it and we can’t come up with any issue bubbling in the background. There are a load of rumours and a lot of speculation but there’s nothing definite emerging to say this was what triggered it all,” added another source.

None of the brothers were known as heavy drinkers and it is understood toxicology tests found no evidence that Johnny Hennessy had consumed alcohol or had taken any medication.

It is understood all those who knew the men are completely at a loss to explain what happened given the ferocious and violent nature of the attacks, particularly the attack on Paddy which was so sustained dental records were needed to identify him.

Gardaí are liaising with solicitors in relation to wills as to who inherited the farm when the Hennessys’ mother Eily died sometime in 1980s or 1990s. She inherited the holding following the death of her husband Tom in the late 1960s when he fell off a bike near their home.

Gardaí have established that one brother wanted to sell six acres on the 15-acre holding some years ago but he pulled back from the sale at the last minute. There was nothing to suggest the matter had led to any major or lasting friction.

Officers have spoken to neighbours but the nearest house to the farm is approximately 400m away so it was unlikely anyone would have heard the disturbance on Thursday.

Gardaí have identified one man with a farm nearby who confirmed he met Johnny Hennessy at about midday on Thursday and he seemed perfectly normal.

Gardaí believe from checking phone records that Johnny Hennessy may have killed his brothers by 6pm on Thursday before driving away from the farm in his Toyota Corolla van at about 10pm to Killacluig near where his body was recovered from the river Funcheon about 1.30pm on Friday.

Gardaí from Mitchelstown had spoken to Johnny Hennessy at about 6pm after they were contacted by a family member in Co Limerick to say that he had been in touch and had not sounded very coherent. However, when gardaí rang Johnny Hennessy, he assured them everything was okay.

Gardaí accepted his assurance and did not call to the family farm. The matter has been referred to the Garda Síochána Ombudsman Commission (Gsoc) because gardaí were in contact with somebody who later died.

Gsoc will examine phone records to try to establish whether or not Johnny Hennessy may have already killed his two brothers when he spoke to gardaí.

It is understood that the bodies of all three brothers have been released to the family but details have not emerged yet as to the funeral arrangements.

If you are affected by any issue in this article, please contact Pieta House on 1800-247247 or the Samaritans by telephoning 116123 (free), or emailing jo@samaritans.ie