Only two incidents of individuals suspected of breaching travel restrictions 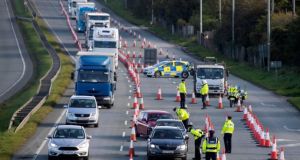 A Garda checkpoint on the N7 at Blackchurch on October 6th. Photograph: Colin Keegan/Collins

Compliance with the latest public health measures has been “very high”, with only two incidents of individuals suspected of breaching travel restrictions being recorded in the past week, gardaí have said.

Under Level 5 of the Living with Covid roadmap, all non-essential retail is closed and people are asked to stay at home, but can exercise within 5km of their home.

Gardaí have conducted checkpoints, community engagement patrols and visits to retail premises to ensure members of the public are adhering to the new regulations.

In a statement on Friday night, gardaí said there have been two incidents since October 22nd where individuals were suspected of breaching travel restriction regulations and files were sent to the director of public prosecutions (DPP).

The statement also highlighted that the volume of private cars on roads has decreased since last week, with overall traffic levels down almost 50 per cent when compared with pre-Covid levels.

There has been one incident where the non-wearing of face masks has resulted in a file being sent to the DPP in the past week, bringing the total to eight since this became a regulation during the summer.

The vast majority of retail premises were compliant with regulations or came into compliance when requested to do so, gardaí said.

However, up to October 29th, there were six incidents where premises have continued with suspected breaches of regulations. A file will be sent to the DPP in each of the cases.

There are early indications that some categories of crime, such as burglary, have fallen since the introduction of Level 5 restrictions while others, such as drug offences, remain at similar levels. However, the drop in crime overall does not appear to be as significant as in the April-June period.

During the course of Covid-19 operation, gardaí recorded 71 crimes that were not related to breaches of regulations, mainly relating to road traffic and drug-related offences.

Deputy commissioner John Twomey thanked the public for complying with the restrictions.

“We are continuing to visit and engage with retail premises to ensure compliance with the regulations. We are seeing wide-spread compliance, but there are some premises who are potentially in breach of the regulations and need to pay attention to the obligations upon them,” he said.

“ An Garda Síochána will focus this weekend on those retailers who are still potentially not compliant.”

The deputy commissioner added that gardaí are continuing to support people who are vulnerable or isolated.

“If you know of anyone who, for instance, needs their pension collected, or some shopping done, or checked on please contact your local Garda station. We are here to help,” he said.

“We appreciate this is a difficult time for people, but we all need to continue to work together to reduce the spread of Covid-19 by adhering to the public health advice.”