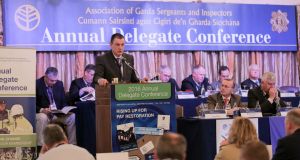 Garda Commissioner Nóirín O’Sullivan was more interested in the corporate image of the Garda than the welfare of her members, the Association of Garda Sergeants and Inspectors (AGSI) has said.

At the opening session of the AGSI’s annual conference in Westport, Co Mayo, the force’s middle managers also launched a highly critical attack on Minister for Justice Frances Fitzgerald, saying the delays in improving Garda pay and conditions had left them “angry and frustrated”.

They also say, with more violence on the streets, including the recent eruption of gang feuding in Dublin, they required ballistics vests, rather than the stab-proof ones they were currently issued with.

The AGSI said Garda members were ill-prepared for a possible terrorist attack, claiming members were not even being supplied with basic intelligence on terrorist suspects or suspicious activities.

However, it has now emerged that protest may involve Garda members in uniform. It would be the first time gardaí have staged any form of protest in their uniforms. The plan is likely to be seen by the government as highly provocative because gardaí take an oath to remain apolitical.

AGSI president Tim Galvin said frontline members were being overworked to the point of exhaustion and they felt they were being supported by neither Ms Fitzgerald nor Ms O’Sullivan.

The remarks relating to the commissioner were most pointed, with the AGSI saying they felt she was not supporting gardaí. This was despite 86 per cent of respondents to an AGSI survey in December saying they felt morale was low or very low. Some 903 AGSI members, or 48 per cent of its membership, responded to its survey.

“We just feel she’s getting her priorities wrong. She should be looking after the people who work for her, the people on the street, the frontline staff, not the corporate image, which is the way the job seems to be gone,” he said. “There seems to be no interest in the people out there physically being attacked. People are tired and they’re making mistakes and, as a result of those mistakes, they’re getting injured.

“That’s the way we feel as an association because we feel she’s not standing up for the people on the front line. She hasn’t come out and said we don’t have enough resources.

“We have said it on numerous occasions she hasn’t come out in support of us and that’s why I feel she’s more interested in the corporate image not in the members of the force.”

Mr Galvin addressed his remarks at conference last night to Ms Fitzgerald. However, she was unable to attend.