Cocaine and illegal prescription drugs worth over €1m seized by gardaí

Some €500,000 cash in vacuum packed bales found during a major operation across four counties 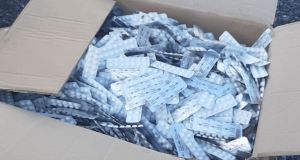 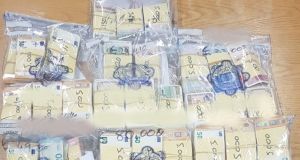 More than €500,000 in cash in vacuum packed bales during a major coordinated operation across four counties.

Gardai have siezed cocaine and illegal prescription drugs valued at over €1 million and also discovered more than €500,000 in cash in vacuum packed bales during a major coordinated operation across four counties.

Vehicles were also seized along with encrypted mobile phones and devices that block signals for mobile communication.

Three suspects, two men and a woman, were arrested in Drogheda, Co Louth, on Monday evening after a surveillance operation targeting a drugs gang active in the north east.

A number of follow-up Garda searches were quickly conducted at several properties in counties Meath, Dublin and Wexford with the total seizure of drugs valued at €1.1 million and €550,000 in cash seized to date.

Detectives from the Garda National Drugs & Organised Crime Bureau (GNDOCB), headed by Det Chief Supt Angela Willis, had a number if suspects under surveillance on the Donore Rd and North Rd areas of Drogheda at about 6pm before stopping the suspects as they traveled in several vehicles.

Two men, aged 50 and 39 years, and a woman aged 43 years were arrested during the operation in Drogheda on suspicion of “enhancing the ability of an organised crime gang to commit a serious offence”.

They were being detained questioning in Dublin under Section 50 of the Criminal Justice Act which allows for suspects to be questioned for up to seven days without charge about gang-related crime.

A number of follow up searches were carried out in counties Meath, Dublin, Louth and Wexford where the cash and drugs were found.

Det Chief Supt Willis said the operation was an example of the Garda’s determination to continue its pursuit of organised crime gangs despite the Covid19 crisis and the significant policing operation relating to the public health crisis.

Gardaí believe the three people arrested in Drogheda are linked to one gang in the worsening gangland feud in the Co Louth town and the seizure of the drugs and cash resulted from the Garda’s investigation of that gang over a period of years.