53-year-old had was attacked at Liverpool match against Roma 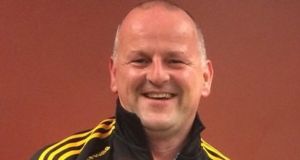 Seán Cox from Co Meath had travelled to the Liverpool match with his brother. Photograph: Facebook 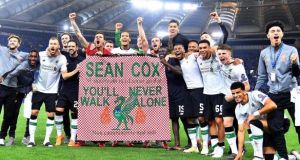 Liverpool players celebrate with a banner supporting Sean Cox who was attacked ahead of the first leg match during Champions League semi final. Photograph: Ettore Ferrari/EPA.

Seán Cox, the Liverpool FC fan left fighting for his life after being assaulted at the first leg of the club’s Champions League semi-final earlier this year, has reportedly regained consciousness.

The 53-year-old father-of-three from Dunboyne, Co Meath was attacked outside The Albert Pub close to Anfield in Liverpool on April 25th by two Roma supporters.

Two Italian men have since been charged with violent disorder.

Mr Cox’s employers, Precision Cables, have said he continues to recover slowly in Beaumont Hospital, Dublin and “has regained consciousness and is undergoing dedicated rehabilitation”, according to electric.ie, an online trade magazine.

“Recovery is progressing positively but very slowly,” it said.

“His colleagues in Precision Cables are overwhelmed by the support and good wishes for Séan and his family that they receive on a daily basis.

“They would like once again to ask that you keep him in your prayers and that he will continue on his road to recovery.”

Mr Cox had gone to the match with his brother when he was set upon.

In a statement published on Liverpool FC’s website in May, the Cox family said he was a “fighter and that, coupled with the medical and spiritual support he is receiving, gives us hope in our hearts and we long for the day when our husband, dad and brother returns home to Dunboyne so we can be together as a family once more”.

They had been “overwhelmed and humbled by the support” they had received since his assault.

Several former Irish internationals expressed their delight on social media at reports of Mr Cox’s ongoing recovery. Paul McGrath tweeted: “Delighted to hear that Liverpool supporter Seán Cox has regained consciousness after three months in a coma following a brutal attack before the Liverpool v Roma game. Wishing Sean and his family all the best.”