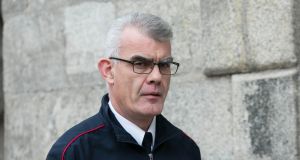 The chairman of the Charleton tribunal has asked for new statements from four senior gardaí by Thursday about a meeting which led to referrals about whistleblower Garda Keith Harrison to the Health Service Executive (HSE) and the Garda Síochána Ombudsman Commission (Gsoc).

Tribunal chairman Mr Justice Peter Charleton said it was only now learning for the first time there was a reference to retired northern region assistant commissioner Kieran Kenny being consulted in relation to a Garda conference held on October 8th, 2013 in Letterkenny.

Notes from the meeting also referred to Chief Supt Tony McLoughlin in the B Branch (Internal Affairs) in Garda headquarters.

The chairman said that when he began the tribunal, he “asked for people who knew things to tell us what they knew”.

The October 2013 meeting was “an important pivot”, the chairman said, as it led to a referral to the HSE, now Tusla, the child and family agency.

The tribunal in its current module is examining contacts between An Garda Síochána and Tusla relating to Garda Harrison.

Handwritten notes taken by Chief Supt Terry McGinn were handed in to the tribunal in June, the tribunal heard, but the chairman said these were not searchable on the tribunal’s computer system until they were typed up.

The chairman said he should have received statements about assistant commissioner Kenny and Supt McLoughlin’s knowledge of the October 2013 conference meeting, possibly from Supt Eugene McGovern, who gave evidence on Wednesday, and probably from Chief Supt McGinn.

“I’m absolutely certain the Garda commissioner should have caused a statement to be taken in relation to this from assistant commissioner Kenny and Superintendent McLoughlin,” the chairman added.

Mr Justice Charleton said he had no idea if there was a conspiracy against Garda Harrison, and he wanted to emphasise that he tended to “go for the conspiracy theory only when the chaos theory has been out-ruled”.

“What I’m saying is things could have been done a lot better.”

The chairman said he was requiring statements to be made available to the tribunal by 10am on Thursday morning from Mr Kenny, Chief Supt McLoughlin, Chief Supt McGinn and Supt McGovern.

Garda Harrison’s barrister Mark Harty SC said he had only just received the notes made by Chief Supt McGinn as he was going through his cross-examination of Supt McGovern.

Mr Harty said the notes were critical to him as they made reference to Mr Kenny, and his client had earlier in the week been asked when giving evidence if he has any evidence of a conspiracy against him outside the Donegal division.

“This isn’t a document which was somehow marginal to what was going on,” Mr Harty said.

Mr Harty said this was the first time anybody had been told Mr Kenny was directly involved in the decision-making process on October 8th, 2013.