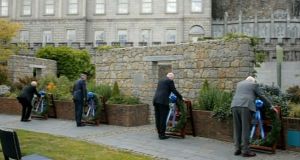 The ceremony took place at Dublin Castle and was live-streamed on Facebook.

A ceremony commemorating members of An Garda Síochána killed in the line of duty took place in Dublin on Saturday afternoon.

Eighty-eight members of the force who lost their lives were remembered at the ceremony at Dublin Castle. Minister for Justice Charlie Flanagan and Garda Commissioner Drew Harris were in attendance.

Speaking at the event, Mr Flanagan said: “From Garda (Henry) Phelan in 1922 right through to our most recent tragic loss almost five years ago of another young man Garda Tony Golden, shot while protecting a victim of domestic abuse - there is a thread that connects all of these men and that’s the courage and heroism they show, the memory and legacy they leave behind.”

Garda Phelan was the first and one of the youngest gardaí to be killed in the service of the State, when he was shot dead at the age of 21 in Tipperary in 1922, he said.

Commissioner Harris described policing as a “calling”, saying police are “drawn to help others, to protect those who cannot protect themselves, to keep our community safe and to bring to justice those who would seek to harm others. That is what our 88 fallen gardaí exemplify.”

“While today is a special day for remembering them, they are never far from our minds on any day,” he said.

The ceremony was not open to members of the public due to social distancing concerns but was instead live-streamed on Facebook. More than 28,000 people watched the live-stream.