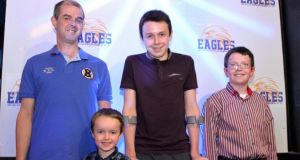 Alan Hawe with his sons Ryan (6), Liam(13) and Niall (11) at an East Cavan Eagles basketball game in May of this year.

A sealed note taken from the house where the Hawe family were found dead in a case of murder-suicide was being examined by gardaí in the hope it may shed light on the motive for the tragedy.

Detectives trying to unravel the mystery are now set to focus on speaking to friends and colleagues of Alan Hawe.

They are hopeful those interviews will determine if he was under any pressure in the period before he killed his wife Clodagh and children Liam (13), Niall (11) and six-year-old Ryan in their Co Cavan home.

Their bodies were found on Monday morning at their home in Barconey Heights near Ballyjamesduff.

Gardaí took a number of knives from the property which they believe were used in the murders by Mr Hawe before he took his own life by hanging.

Gardaí are trying to determine whether Mr Hawe’s mental state had deteriorated suddenly as the beginning of the new school year approached and are hopeful his colleagues can assist in that regard.

Of particular interest would be any indication prior to the summer break that he was under pressure or had come into conflict with anybody which might have troubled him as he prepared to return to work.

Senior officers said because the family were not regarded as being at-risk and had not required assistance from any health or mental health State agency, the investigation was keen to establish as much about Mr Hawe’s life as possible.

A note was found on the backdoor of the family home instructing any caller to the house to alert the Garda rather than enter the property themselves.

A second more substantial note or letter was also found. Garda sources said it had been taken away for fingerprint and DNA testing as part of their efforts to confirm its authenticity.

The same sources said the letter may hold the key to the tragedy, adding that Mr Hawe did not have a history of known mental health problems and that his actions were a “bolt from the blue”.

Other notes were also taken from the property for examination.

Because Mr Hawe is the only suspect for the murders of his wife and three boys there can be no criminal charges. However, gardaí will prepare a file for the coroner’s inquest based on their investigations.