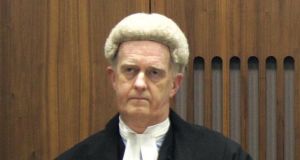 A member of the High Court bench since 2006, Mr Justice Charleton has been assigned to commercial cases for the past four years and has written extensively on criminal law.

He also has experience in judicial review and personal injury cases, is an ad hoc judge of the European Court of Human Rights and has been supervisor of the Judicial Researchers’ Office since 2011.

Mr Justice Fennelly retired last month, having served on the Supreme Court since 2000, and has been appointed by Government to lead the commission of inquiry into the taping of telephone calls at Garda stations.

Educated at Trinity College Dublin and King’s Inns, Mr Justice Charleton was called to the Bar in 1979 and took silk in 1995. He is the author of a number books on criminal law and has also published on family and constitutional law, copyright, extradition and judicial review. One of the country’s leading barristers before his appointment as a judge, he worked as counsel for the Morris tribunal into allegations of corruption in the Donegal division of An Garda Síochána.

The appointment leaves a vacancy on the High Court, which is expected to be further depleted when nine judges are appointed to the new Court of Appeal later this year.

Later this month, the Judicial Appointments Advisory Board will meet to consider applications to fill the High Court vacancy left by the retirement earlier this month of Mr Justice Iarfhlaith O’Neill. It may now use the same panel of applicants to choose a replacement for Mr Justice Charleton.

The advisory board receives applications for judicial posts and sends Government a list of candidates who meet a set of minimum criteria. However, the board does not rank candidates by merit and the Government is not required to choose from its list, giving ministers wide discretion. Serving judges are not required to apply through the JAAB.