Body found in Wexford may be that of Italian woman, gardaí say

Results of postmortem on skeletal remains to determine course of investigation 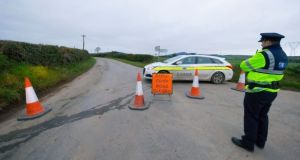 The scene near where human remains were found at Ballyandrew, near Ferns Co Wexford. Photograph: Patrick Browne

Gardaí investigating the discovery of a woman’s body in a ditch in Co Wexford are hoping a postmortem examination will clarify whether or not the woman died as a result of natural causes or foul play.

Officers have yet to formally identify the skeletal remains found in north Wexford but believe they may be those of an Italian woman in her 50s who was leading a nomadic existence, travelling around Ireland.

The body of the woman was found in a ditch at Ballyandrew, 6km northwest of Ferns and 13km southeast of Bunclody, by a woman out walking her dog.

It is understood the woman made the grim discovery at about 11.30am on Monday when the dog started rummaging in the undergrowth and she immediately raised the alarm and contacted gardaí.

Gardaí from Bunclody were quickly on the scene and cordoned off the area and preserved the scene overnight. The services of the State Pathologist’s Office were requested.

Assistant State Pathologist, Dr Linda Mulligan is due to arrive at the scene on Tuesday morning and carry out a preliminary examination of the body in situ before it is removed for a postmortem examination.

Detectives say that they are keeping an open mind on the discovery and the course of their investigation will be determined by the results of the postmortem.

The body found was almost entirely skeletal save for some long black hair, leading gardaí to believe the body had been at the quiet rural location for at least several months.

Gardaí have still to formally identify the body and may need the help of a forensic anthropologist and may have to resort to checking dental records to try to establish who exactly the person is.

However, officers found a rucksack nearby containing a CV bearing the name of an Italian woman in her 50s who was known to be living rough as she travelled around Ireland, leading a nomadic existence.

It is understood the woman’s nomadic lifestyle prompted a number of people to express concern about her and several reported these concerns to gardaí.

The last reported sighting of the woman alive in Ireland was made to gardaí in 2017 but gardaí have no report of her going missing.

Gardaí were last night liaising with Interpol with a view to Italian police making contact with the woman’s family to see when they last heard from her or if they were aware of her whereabouts.

Meanwhile, gardaí have appealed to the public for assistance and anyone who has any information or who can assist is asked to contact Enniscorthy Garda station on 053-9242580.