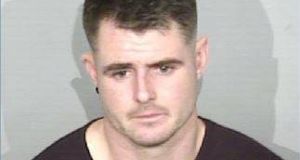 A Co Kildare man, previously jailed for manslaughter, has been described as “dangerous” by Australian police who are seeking him in connection with two violent assaults after he entered the country on a student visa.

Two warrants have been issued for the 29-year-old’s arrest since his arrival in the country. He is wanted in connection with a stabbing incident in Randwick, Sydney, on August 29th in which a man’s ear was almost severed. A number of Irish people were involved in the incident and a couple have been charged.

Farrell is also wanted in connection to a one-punch assault which happened in November in the beer garden of a hotel in Matraville, Sydney. A 56-year-old man who was allegedly punched was hospitalised for two days.

“He is a dangerous individual,” Mr Fuller said of Farrell.

NSW police have appealed for the public’s help in tracking down the Broadford man, who received a 3½-year sentence in 2013 for the manslaughter of Andrew Dolan (20).

Farrell and two others attacked Mr Dolan on Pearse Street in Mullingar on December 23rd, 2011. The NUI Galway student died on January 1st, 2012, from the injuries he sustained in the unprovoked assault.

Joe and Rosie Dolan, Andrew’s parents, said it was painful to hear that Farrell was now wanted in Australia in connection with further violent incidents.

“It was easier to think it was a nice guy who went wrong in a moment [rather] than a horrible guy,” Ms Dolan said.

Questions have been asked in New South Wales about how someone convicted of manslaughter could have gotten a visa to enter the country.

“It is [frustrating] and from our perspective we have an important job to do which is find him, put him behind bars and ensure he’s kicked out of the country once he’s served his time,” Mr Fuller told 2GB radio in Sydney.