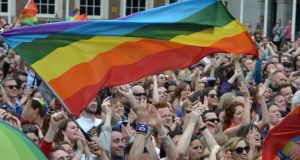 The Court of Appeal decision means the referendum returning officer can issue the certificate confirming the result of the May 22nd poll. Photograph: Charles McQuillan/Getty Images

The Court of Appeal has cleared the way for the introduction of same-sex marriage after dismissing two separate applications for leave to bring petitions challenging the result of this year’s referendum.

The decision means the referendum returning officer can issue the certificate confirming the result of the May 22nd poll. A stay on the issuing of the certificate had applied pending the appeal court’s ruling. It has now been lifted.

After a one-day hearing on Thursday, the three-judge court rejected arguments by Gerry Walshe, an electrican, of Lisdeen, Co Clare, that he had established the necessary grounds to bring a petition.

The court also found Maurice J Lyons, a gardener, of Callan, Co Kilkenny, had made out no basis entitling him to bring a petition.

In opposing applications for costs against them made by Michael McDowell SC, for various State parties, both men argued they brought their applications in the public interest and because they believed the views of those opposed to same-sex marriage were not represented by the State during the referendum campaign. The court awarded costs against both men.

Mr Justice Sean Ryan, Ms Justice Mary Finlay Geoghegan and Mr Justice Michael Peart ruled there was no basis on which the court could grant leave for a petition to be brought by either man.

Mr Walshe had provided no evidence to support his claims the outcome was affected by an unlawful spend of public money, Mr Justice Ryan said. Mr Walshe had claimed millions of euro were provided to various organisations, including charities, but had provided no proof any such monies were public monies, the judge said.

Mr Walshe had also not established any wrongdoing or irregularity, as required under the Referendum Act, for a petition to be brought. His claims that the Garda Representative Association was not entitled to advocate a Yes vote, or that the Taoiseach had refused to participate in debates with No campaigners, were not grounds on which a petition could be brought, he said.

Claims that the referendum process was invalidated by identifying marks on ballot papers which damaged the secrecy of the ballot were based on a “completely mistaken” view of the relevant law which provided each paper should have a mark, he said.

Other complaints about An Post issuing a St Valetine’s Day Love stamp with an equality symbol, which Mr Walshe alleged amounted to a “subliminal message” in favour of a Yes vote, were also dismissed.

Mr Justice Ryan said the threshold for a petition was a high one and Mr Walshe had to show any complaint he advanced would have materially affected the result. He had failed “and failed significantly”, to do so on each and every point he had raised.

Dealing with Mr Lyons’ appeal, the judge said arguments the Constitution could only be amended by a proposal initiated by the people themselves were based on a “fundamental misunderstanding” of what the Constitution said, what it meant and what the powers of the courts were.

Mr Lyons also erred in arguing the sovereign people could not approve amendments that contradicted other provisons of the Consttution as any amendments approved were a matter for the people, the judge said. The courts could not say to the people, no, they could not vote in favour of a particular measure as that was precisely the people’s own function.

The judge rejected further arguments that those members of the electorate who did not vote in referendums must be regarded as “no” voters. Mr Lyons’ arguments in that regard were “contrary to principle” and “contrary to common sense”.

In this referenedum, there was a substantial majority in favour of the proposal but that was irrelevant as the Constitution provided a proposal was approved if passed by “a majority” in a referendum, the judge said. Mr Lyons’ arguments all came down to a rejection of the majoritarian principle and that “simply does not arise”.