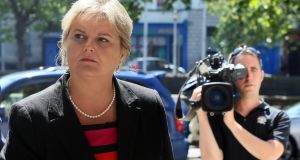 Former Rehab chief executive Angela Kerins: In their ruling, the judges said it could not be disputed that much of what was said to Kerins by committee members was “damaging to her reputation personally and professionally”. Photograph: Collins Courts/File

The ruling by the three-judge Divisional Court of the High Court in the case taken against a Dáil committee by Angela Kerins is clear in its conclusion and a major blow to the former Rehab chief executive.

A dramatic aspect of the case put by Kerins was that such was the trauma she suffered as a result of appearing before the Dáil Public Accounts Committee (PAC) in February, 2014, that she afterwards attempted to take her own life.

Kerins took the case out of a stated determination to prevent what had happened to her happening to any other citizen. She sought damages. The decision of the three judges after a 10-day hearing in which she, the committee, and the State all had legal representation, leaves her facing a potentially enormous legal bill.

She was not present for the ruling. Sources close to her have, over recent months, responded to questions about the potential for her being left facing huge costs with the answer that she was very confident she would win.

Her confidence was misplaced. While the possibility of going on to the Court of Appeal exists, it comes with the risk of adding to her financial exposure. On the other hand, the court may decide not to make her shoulder all the costs of the defendants, given the important topics raised.

Kerins attended the PAC meeting voluntarily, having been asked to do so at a time when there was intense public controversy about her salary at Rehab, a private charitable organisation that receives extensive public funding.

During the seven-hour appearance, she was questioned about a range of issues that went far beyond those which she had been told beforehand would be canvassed. As well as the topics covered, she also took issue with the tone in which questions were put to her.

In their ruling, the judges said it could not be disputed that much of what was said to Kerins by committee members was “damaging to her reputation personally and professionally”. Comments made at a subsequent meeting, that she did not attend, on April 10th, 2014, were “extremely damaging” to her reputation.

At the February meeting, Kerins was asked about her salary ( €240,000) and about her pension. It was suggested that she was “grossly overpaid” and that she lived “on a different planet”.

In March, the committee wrote to Kerins asking her to again appear before it. By this time she had been to hospital. On April 4th, Kerins resigned as chief executive, and five days’ later she told the committee she would not be attending on grounds of medical advice.

At the end of April, her solicitors told the committee she would not be appearing before it again even after her recovery. The committee applied to the Committee on Procedure and Privileges for the right to compel her attendance. They were refused.

Kerins argued that in reality her appearance before the PAC in February was not voluntary, as she would have been harshly criticised if she had chosen not to attend in the midst of what was then a media storm. However, the judges said she could have chosen not to attend, as did her predecessor at Rehab, Frank Flannery. This was a key finding, as it meant the committee, having not compelled her to attend, was not exercising any power.

The judges did not accept Kerins’s argument that the PAC members were involved in adjudication when they made comments about her. They were, instead, just making utterances, and the Constitution prohibits the courts from making members of the Oireachtas “amenable” for any utterances made in the Oireachtas.

This privilege that Oireachtas members have was described as “awesome” in an earlier ruling quoted by the judges. Parliamentarians have the potential of “inflicting grave damage and creating even life threatening consequences for third parties”, Mr Justice William McKechnie observed in an earlier case involving former senator Ivor Callely. Yet the people affected “must remain without legal redress as the justice system is left powerless to intervene.”

The Kerins decision will not make cheerful reading for businessman Denis O’Brien who is awaiting a ruling in a case involving the same issue of privilege.

The only authority that can hold Oireachtas members amenable for their utterances is the Oireachtas itself, the judges said. It was for this reason that they said that their finding was not a denial of Kerins’s constitutional rights. In the Kerins case, “the custodian of those rights is not the court but the Oireachtas itself”.