Ana Kriégel: Remember those still in shock at her violent murder, ceremony told

‘The solid foundations on which we stood are shattered,’ priest tells prayer service 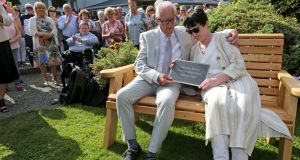 Patric and Geraldine Kriegel at the planting of a tree and the unveiling of a bench and plaque in memory of their daughter, Ana, in the grounds of the Leixlip Manor Hotel. Photograph: Crispin Rodwell

Fr Tony O’Shaughnessy spoke of families, plural, on Sunday when asking for prayers for those affected by the murder of 14-year-old Ana Kriégel and the subsequent events.

“In the past year we have witnessed a horrendous tragedy in our community, bringing with it an almost indescribable sense of loss, pain, grief, hurt, confusion, anger,” the head of Confey Parish said at a prayer service for Ana in St Charles Borromeo Church in Leixlip.

The service was the second of two events which took place over the weekend to allow those from the community to briefly join Ana’s family in grieving and remembering the talented schoolgirl.

Typically such events take place on the anniversary of a death, which for Ana would have been May 14th. But on that date her parents, Geraldine and Patric, were in the middle of the trial of the two 14-year-old boys accused of her murder. Both teens were convicted on June 18th. They will be sentenced on July 15th.

On Saturday, Geraldine and Patric joined 200 others in the June sunshine for a tree planting in memory of Ana on the grounds of Leixlip Manor Hotel.

“Ana loved coming here on her school holidays,” Geraldine told the crowd. “She is here in spirit now. Let’s come back here and spend a few minutes with her.”

Fr O’Shaughnessy welcomed those from inside and outside the parish. He asked for prayers for Ana, Geraldine, Patric and their wider family.

Remember the teachers, neighbours, parents, guardians, children and young people still in shock over Ana’s violent murder a year ago, the priest said. Remember also those who have to work with the bereaved on a daily basis as part of their job.

He also asked for prayers for the other families “whose lives have been turned upside down [in] this tragedy”. He didn’t mention their names. Legally he couldn’t.

The families of the murderers, who are publicly known only as Boy A and Boy B, still live in the general area, although Boy B’s family have reportedly been forced to go into hiding due to online threats.

Boy A’s parents’ home has been damaged on at least one occasion. It is not known if either family intend to remain in the area.

Although Sunday’s service was interspersed with uplifting hymns – a Russian nocturne was played on the harp in recognition of Ana’s home country as attendees lit candles in her memory – the main feeling was one of grief and confusion.

“We were numbed by the horrific nature of the horrible tragedy in our midst and we continue to feel that numbness and incomprehension in our hearts,” Fr O’Shaughnessy said.

“Questions arise in our hearts that remain unanswered. The solid foundations on which we stood are shattered.”