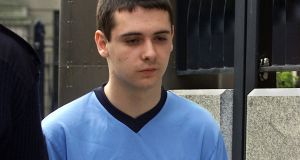 Darren Goodwin (above) was 15 when he murdered Darragh Conroy. Photograph: Collins

Ana Kriégel’s murder in Lucan last year was shocking, not least because of the age of the accused and the brutality involved. But it was not unprecedented in Ireland.

Before the prosecution of Boy A and Boy B Ireland has seen a handful of cases of involving minors accused of murder, rape or serious sexual assault. Each presented unique challenges for judges.

As Mr Justice Paul McDermott dealt with the daunting task of sentencing the two for Ana’s murder (and in the case of Boy A, violent sexual assault), the case of Darren Goodwin was at the forefront of his mind. He was 15 when he murdered Darragh Conroy (14) in Laois in 2003.

Goodwin beat the boy to death with a hammer in Mountmellick after an apparent row over a mobile phone. He showed little remorse. And there were indications the murder was a “trial run” for an attack on a garda.

Despite his age, Goodwin was named publicly at the time due to a loophole in the Children Act 2001 which was later closed.

In 2004 the trial judge Mr Justice Barry White sentenced the-16 year-old to life imprisonment with a review after 10 years. The case and the subsequent appeals set the legal precedent that a life sentence is not mandatory for minors convicted of murder but is available to the judge if they feel it is justified.

Six years previously the Central Criminal Court heard the case of teenage girl who was 15 years old when she shot and killed chip-shop owner Franco Sacco (29) in Templeogue, Dublin.

The prosecution said the girl, who lived with the Sacco family, was put up to the murder by Mr Sacco’s wife Anna Sacco who he allegedly beat and raped during their abusive marriage. Ms Sacco was cleared of murder in a later trial.

The end result of the girl’s case was probably the lightest sentence ever handed down for murder in the State’s history. She pleaded guilty to the murder and was sentenced to seven years by Mr Justice Paul Carney, a punishment which he said would “allow her to rebuild her life in her early twenties.”

She was sent to Oberstown Girls’ School which at the time held teen offenders until the age of 17.

One year later, just before the girl turned 17, the State came back to court and said it had no facility to hold female offenders over the age of 16. Eighteen-year-olds girls could go to Mountjoy Women’s Prison but there was nowhere for 17-year-olds.

In July 1998, Mr Justice Carney agreed to suspend the remaining six years of the seven-year term on strict conditions and ordered release of the girl.

In 2004 the same judge heard the case of Jason Ring who was 14 when he took part in the violent gang-rape of a Limerick woman. Ring and three other boys, who were all a year older, were on a crime spree when they locked the woman’s boyfriend in the boot of a car in Cratloe Woods, Co Clare and took turns raping his girlfriend (Ring was named at the time due to the same loophole which arose in the Goodwin case).

Because he was under 16, the highest available sentence for Ring was four years. Mr Justice Carney imposed the maximum term and declined to suspend any of it. The older boys got between eight and 10 years.

“I am fully aware that I am dealing with children and they have to be rehabilitated. However, the protection of society is at the forefront of my mind and people cannot be exposed to danger by them in a short period of time,” Mr Justice Carney said.

“Because I am treating them as children does not mean I have to deal with them with short sentences and community will have to be protected from their criminal propensities.”

The Children Act offers a range of protections for child offenders. However every one of these fall away once the defendant turns 18, even if the crime was committed years previously.

This was demonstrated in the case of Daniel McDonnell who was 17 when he shot and killed Melanie McCarthy McNamara as she sat in the back of her boyfriend’s car.

McDonnell himself supplied most of the evidence which was used against him. While in garda custody he wrote “2 in the head. The bitch is dead ha ha” on the wall of his cell.

He also sent his brother a letter from custody stating: “This war ain’t stopping. Take my word for it. Close-range head shots. That’s what I’m going for. If I get High Court bail I swear on my whole family, them four will be in the ground… Little did he know I had a loaded 12-gauge. Left his bitch all over the Sunday World front page.”

In the second letter, to his former girlfriend, he wrote: “That other thing wouldn’t have happened if I’d known she was in the car. It was meant for that other smell bag. He won’t get away with bullying my Ma.”

Because he was 19 when the case finally came to an end in 2014, McDonnell was subject to the mandatory life sentence required for adults convicted of murder, a sentence which was duly imposed by Mr Justice Carney.

An appeal heard last year against McDonnell’s conviction failed. An appeal against the imposition of a life sentence for the crime is still pending.