Almost 70 domestic violence deaths in North in past decade 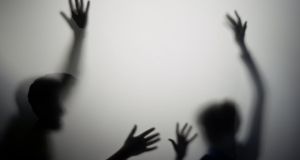 There were 77 incidents of domestic abuse reported every day in the last year – three every hour.

Sixty-seven people across Northern Ireland were killed by their partner, ex-partner or a family member, according to police records covering the last 10 years. The domestic killings recorded by the PSNI between 2005/06 and 2014/15 make up 27 per cent of all homicides (248) during the period.

Details of the murder and manslaughter of both adults and children were published on Sunday by Detail Data, a joint project between investigative news website The Detail in Belfast and the Northern Ireland Council for Voluntary Action.

It comes as the Northern Ireland Assembly continues to stall on the publication and implementation of the long-awaited new Domestic and Sexual Violence and Abuse strategy.

The figures show there were 28,287 incidents of domestic abuse reported to the police during the 2014/15 financial year.

This equates to 77 incidents reported every day. Or three every hour.

The domestic abuse crimes committed against women, men and young children in the last year include:

116 cases of cruelty to children/young people.

From victims to survivors from The Detail on Vimeo.

Inside a Women's Aid refuge from The Detail on Vimeo.

An inter-ministerial group established at Stormont to address the issue of domestic violence has not met in almost three years.

Northern Ireland health minister Simon Hamilton said the new domestic abuse strategy has been endorsed by his department’s top management group but added that consideration is now being given to how the strategy’s aims may be progressed “in the exceptionally difficult financial environment we all face”.

The strategy must also be approved by the Northern Ireland Executive.

The data, obtained under a Freedom of Information request, shows 36 females and 31 males lost their lives to current or former partners or family members in the period 2005/6-2014/15, according to PSNI records.

The death toll includes adults and children, with 13 children in the age category of 0 to 9-years-old.

Omagh was the PSNI area with the most domestic homicides recorded during the 10-year period. Nine people were murdered by partners, ex-partners or family members – this includes the six members of the McElhill family who died in a fire started by Arthur McElhill in November 2007. He also died in the blaze.

Out of the 67 deaths, a charge or summons resulted from 48 cases.

The data states that the offender in four cases died before proceedings were taken and in one case no prosecution was directed. The detection category was blank in 14 cases – including the six McElhill deaths. Some others may still be being considered by the Public Prosecution Service.

Not all domestic abuse incidents result in the recording of a crime and a single incident can involve multiple crimes. A total of 13,426 crimes were recorded in 2014/15 from 11,927 of the reported incidents.

Detective Chief Inspector David McBurney, from the PSNI’s Public Protection Branch, said: “Tackling domestic abuse is a priority for the PSNI. The number of reports of domestic abuse continues to rise and this tells us that people who may not have previously come forward are taking the courageous step and calling the police.

“Unfortunately, there are still incidents of domestic abuse in Northern Ireland that go unreported. Our message is ‘Domestic abuse is wrong, pick up the phone and make it stop’ and that is exactly what we want victims to do.”

“Over the last 10 years much has been achieved, which is why it is all the more disappointing to see the delay of the Northern Ireland Executive in publishing a new strategy.”

Queen’s University Belfast is this week hosting the European Conference on Domestic Violence. The four-day event opened on Sunday.

Kathryn Torney writes for the Detail. To read Detail Data’s report in full go to www.thedetail.tv/data

Number of people in hospital with Covid-19 drops to 597 10:53
Baarack the overgrown Australian sheep shorn of his 35kg fleece 09:57
Gardaí believe shooting of 17-year-old in Dublin was failed murder attempt 08:44
Covid-19: Vaccination programme ‘chink of light’ for travel industry 06:00
Could comedy offer a way to communicate science more effectively? 06:00