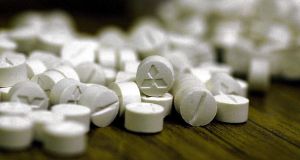 Gardaí in Galway have arrested two men in connection with the seizure of cannabis and ecstasy.

As part of ongoing joint investigations targeting drug trafficking in the Galway area, a joint intelligence led operation was conducted by Revenue’s Customs Drugs Law Enforcement and the Drugs and Organised Crime Bureau supported by officers from the Galway Regional Drugs Unit.

Herbal cannabis and approximately 4000 ecstasy tablets with an estimated street value of €50,000 were seized.

It is believed that these controlled drugs were to be destined for the Galway “rag week” market.

The two men are currently detained at Galway Garda Station, under Section 2 of the Criminal Justice (Drug Trafficking) Act 1996 (as amended).