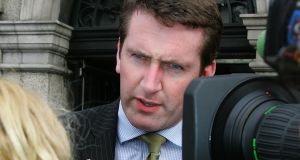 The decriminalisation of drug use could become an all-party position, similar to the recognition of Travellers’ ethnicity and changes to prostitution laws, if the Oireachtas Justice Committee backs the proposal this week, according to Aodhán Ó Ríordáin, the Minister in charge of the National Drugs Strategy. Photograph: David Sleator/The Irish Times.

The decriminalisation of drug use could become an all-party position, similar to the recognition of Travellers’ ethnicity and changes to prostitution laws, if the Oireachtas Justice Committee backs the proposal this week, according to Aodhán Ó Ríordáin, the Minister in charge of the National Drugs Strategy.

Speaking in London, where he was addressing an international workshop on drugs policy, Mr Ó Ríordáin said he was optimistic that the committee would recommend a decriminalisation policy similar to that in operation in Portugal.

The Minister said he expected the Labour Party to campaign for decriminalisation of drug use in the next general election but he suggested that, even if the proposal wins broad support, it could take years to implement.

“I think if we’re going to introduce decriminalisation in Ireland it will take a number of years to get the systems in place to deliver it effectively. Because it is a major policy shift, it does require an awful lot of debate, research and understanding that the dynamics in Ireland are very different to the dynamics in Portugal. But as a model, I think it’s a progressive way forward. I think it’s much more humane and I think it makes absolute sense if you have 70 per cent of your drug convictions for possession for personal use. Those resources could be much better used tackling the pushers not the takers,” he said.

Mr Ó Ríordáin told the workshop at the London School of Economics (LSE) that he is confident the cabinet will agree later this month to legislate for the provision of medically supervised injection centres, or use by intravenous drug users. He said that, although the legislation would not place a restriction of the number of centres, he envisaged just one in Dublin’s city centre, perhaps to be followed by one each in other major cities such as Cork, Limerick and Galway if there was a demand for them.

“A medically supervised injecting centre is not a “free for all” for those who wish to inject drugs; it is a clinical, controlled environment which aims to engage a hard to reach population of drug user and provide defined pathways to higher threshold treatment services such as medical and social interventions and counselling services,” he said.

The workshop, which was organised by Irish-born historian John Collins of the LSE IDEAS International Drug Policy Project, heard from Canada, Portugal, Switzerland and the UK about recent trends in drug policy. Trinity College Dublin’s Prof Catherine Comiskey, Chairperson of the National Advisory Committee on Drugs and Alcohol (NACDA), said that decades of evidence now showed clearly that treatment was more effective than criminalisation in tackling substance abuse.

“25 per cent of Irish people have used cannabis in their lifetimes, one in four. So are they all criminals?” she said.