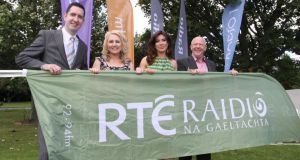 RTÉ has initiated a new online news service in Irish as part of a restructuring of news delivered as Gaeilge. Photograph: Raidió na Gaeltachta/RTÉ

RTÉ is initiating an online news service in Irish today as part of a restructuring of news delivered as Gaeilge.

The State broadcaster has announced that the RTÉ.ie news website, and the RTÉ News Now App will feature national, international and regional news in Irish for the first time.

The online operations will be based in Nuacht RTÉ’s centre in Baile na hAbhann, Connemara, with content produced by both Nuacht RTÉ and RTÉ Raidió na Gaeltachta journalists.

“ This demonstrates RTÉ’s commitment to the Irish-language, as does the recent introduction of the additional Nuacht TV bulletin on RTÉ News Now which resulted in an extra 26 hours of Irish-language news coverage annually,”he said.

RTÉ has opened a new regional studio in Athlone Institute of Technology, with similar openings in Waterford and Dundalk, Co Louth - reversing a previous decision to cut back on regional news.

The restructured Irish-language radio news, and the new online service, will be officially launched by Mr Curran at RTÉ Raidió na Gaeltachta in Casla, Co. Galway on Wednesday.