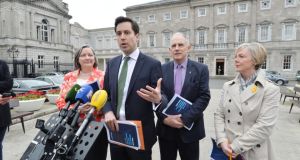 Eoghan Murphy, the newly appointed Minister of State for Financial Services, wants to take responsibility for implementing the 29 recommendations of the Oireachtas Banking Inquiry, which published its report in January.

Speaking to The Irish Times, Mr Murphy, who served on the 11-person banking inquiry and played a central role in writing the final report, said he was “really keen” to take on this task and he is looking at setting up a committee to oversee the co-ordination of this work.

“What we need to flesh out is exactly what the relationship could be between the committee and the Central Bank/regulator, bearing in mind the central role that they have [in implementing recommendations],” he said.

“Also, who’s going to drive the action areas across the Government departments? I’ll certainly be responsible for anything that relates to finance, and public expenditure and reform but we’re still in discussions as to whether or not I’ll be taking on responsibility for other aspects of Government that this is relevant to [the inquiry].

Mr Murphy said he intended to meet with Fianna Fáil’s Michael McGrath and Sinn Féin’s Pearse Doherty, the parties’ finance spokesmen, to discuss how the committee might go about its work.

“I need to . . . see how they think this should be done because it requires their input, too,” he said.

Mr McGrath and Mr Doherty were members of the inquiry, although the Sinn Féin TD declined to sign the final report.

“It’s a responsibility that I feel I take with me having been on the inquiry,” he said.

Mr Murphy, who is about seven weeks into his role as a junior minister, said the Brexit fallout is top of his priorities.

“The whole thing is a big negative for Ireland. That’s why it’s so important for us to do what we can to help the UK retain a positive relationship with the EU.

“The UK having access to the single market is important to us because we complement them in a lot of areas of financial services but we also compete with them, too.

“A hard exit would be very difficult for us and then we’ll have to see where we pick up gains in that space.”

However, he said the speed of decision making by corporates post-Brexit has been quicker than expected.

“That’s what poses a challenge with us for now,” he said. “We want to work with the UK and work with Europe to try and be a bridge between the two to make sure the exit is amicable and positive.

“Yet, if financial services entities are already making decisions before we’ve even had a chance to see if that’s possible, and what that might look like, we’re put in a difficult space in terms of going after opportunities.

“We know the centres they’re looking at . . . Dublin, Paris, Frankfurt and Luxembourg. It’s not clear yet who’s moving where and to what extent they’re moving. But it’s going to happen more quickly that we thought.

“We could probably expect in the next six months we will have a better idea of what the actual chances and what the actual opportunities are. But we’re treading very, very carefully.”

He said Ireland was ahead of its target to create an additional net 10,000 jobs in international financial services in the four years up to 2020.

Some 2,600 new roles were created last year and a review of the second quarter of 2016 shows that “we’re ahead of target again”.

Mr Murphy said “we’ll have to wait and see” if AIB’s stock market IPO can get away in 2017, having been shelved for this year due to market volatility.

He also gave his thoughts on the Central Bank’s review of its macroprudential rules.

These were introduced at the start of 2015 and require people to have a 20 per cent deposit in place before being approved for a mortgage.

First-time buyers are required to have a 10 per cent deposit on the first €220,000 of a house price and 20 per cent for the balance.

Some 10 per cent of mortgage lending can fall outside these loan-to-value (LTV) rules.

Permanent TSB recently revealed that 11 per cent of its in new mortgages last year were issued as LTV exemptions.

This was four points below the exemption limit and led to the bank being criticised by Sinn Féin’s’s Mr Doherty.

“It’s a difficult thing to manage from talking to the banks, to try and get that right because there might be a lot of approvals given but the drawdowns might not materialise. But I thought it [PTSB figure] might have been a little bit higher.

“What we would like is as much information as possible to be released by the Central Bank in the aggregate so that we can have an informed discussion around how these rules are working, if they are working in the right way, and [to discuss] some of the unintended consequences that may or may not be having.”