Economist Alan Ahearne has told the banking inquiry he warned the then Minister for Finance Brian Lenihan of the importance of having “a very accurate picture” of the banks just weeks before the guarantee. 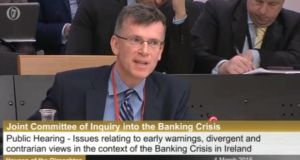 Alan Ahearne, a former special advisor to the late Minister for Finance Brian Lenihan has told the banking inquiry that he “expressed concern” about data from the Department of the Environment that showed that one in three new homebuyers in 2006 took out a 100 per cent mortgage.

A former special advisor to the late Minister for Finance Brian Lenihan has told the banking inquiry he warned Mr Lenihan of the importance of having “a very accurate picture” of the banks just weeks before the guarantee.

Alan Ahearne, a professor at NUI Galway and a recently appointed advisor to the International Monetary Fund, worked with Mr Lenihan from 2009 to 2011.

Fine Gael TD Eoghan Murphy asked Mr Ahearne if he would be willing to “get some facts on the record” in relation to the period he spent working with Mr Lenihan.

Mr Ahearne said he had been invited to discuss issues relating to early warnings and contrarian views in the context of the banking crisis, and that these were the matters he had prepared for.

“I’d have to look up my records if we’re dealing with some other issues,” he said. “This is the context phase [of the inquiry] and I was invited in that context,” he said. “I know you’re moving on to the nexus phase when you will be dealing with subsequent issues.

“I’d be delighted to come back, if I’m invited, to discuss those issues. But in order to give the committee accurate answers...I really would need to look back on my records.”

Mr Ahearne was however prepared to answer questions about a meeting that took place with Mr Lenihan in August 2008.

He said the meeting took place in the Department of Finance at the request of the minister. “There were several people in the room coming and going but it was mostly the minister and myself,” to told the inquiry.

The meeting lasted “maybe an hour and a half” and entailed “a very wide-ranging discussion about lots of different things that were going on in the Irish economy”.

Asked by Mr Murphy whether he found it “odd” to be called to a meeting with the Minister for Finance, Mr Ahearne said “not really”.

“I had written a lot of stuff and been vocal in the media so it struck me as a sensible thing for a minister to reach out,” he said. “I subsequently learned that he was actually meeting a lot of people around that time – a lot of different economists.

“That was his style. He spoke to an awful lot of people and bounced ideas off a lot of people, so no, I didn’t find it odd.”

Mr Murphy also asked Mr Ahearne for his impressions on whether Mr Lenihan had, at that point, an accurate picture of the banking system.

“I did say to him that it was important that you have a very accurate picture of what these banks are like [and] what their loan books really look like.

“Now, I wasn’t assuming he didn’t have that. He said ‘thank you, that’s very good advice’.”

On the issue of Anglo Irish Bank and Irish Nationwide Building Society, Mr Ahearne said Mr Lenihan remarked to him that Anglo “has some good stuff”.

“I didn’t know much about Irish Nationwide and I remember his saying to me that this bank was extremely exposed and that was news to me,” he said. “I knew very little about that bank. I had known anecdotally that Anglo was very exposed.

“He mentioned that Anglo was highly exposed and therefore troubled, but ‘it also has some good stuff’. He said something like that, which sort of surprised me because everything I was hearing - all the rumours at the time - was that it was a complete basket-case.

“But he mentioned that. Now whether he was referring to some properties they had in New York or London or Dublin - he may well have been talking about that. He didn’t have any such comments about Nationwide. He seemed to think they were even worse.”

Asked whether nationalisation or a guarantee had been mentioned at all, Mr Ahearne said “no, there was no discussion of solutions or what was going to happen”.

“You wrote that [Lenihan] mused whether it would be possible to knock over two dominos without knocking over the other four,” said Mr Murphy. “You assumed he was contemplating the closure of Anglo and Irish Nationwide but was concerned about the knock-on effects. Why do you think he was contemplating this at that time?”

Mr Ahearne said he didn’t know but that it may have been related to “the earlier discussion about exposures”.

“Both those institutions were heavily exposed to the property market,” he said. “The other banks had more diversified loan portfolios. They had mortgages and other types of corporate loans. But Anglo was a monoline merchant bank. All it did was property. I hadn’t realised in many ways that Irish Nationwide was like that too. It probably reflected those facts.”

Mr Ahearne said he had “an open mind” as to whether the guarantee was a well-designed policy.

“I said at the time it was important not to let the banks go into a disorderly failure,” he said. “It was important that...people didn’t walk into an Irish bank to withdraw money and be told ‘sorry the bank has no money’.

“That would have been chaotic – a disorderly failure – so the government was absolutely right to ensure that didn’t happen. I did mention how important it was to safeguard deposits.”

He said he was “puzzled” about why the government included subordinated debt in the guarantee.

“Now that doesn’t mean there wasn’t a good reason,” he said. “I couldn’t think of a good reason – that might be my problem – but it proved controversial.”

“The problem is the cost is changing all the time,” he said. “As interest rates have fallen dramatically over the last 12 months, all of that is reducing the cost of the burden of recapitalising the banks.

“The €64bn [gross cost] is a particular number. It’s the headline number, but the actual cost of the burden in terms of the Irish people paying out has fallen quite dramatically over the last 12 months because long-term interest rates have fallen.”

Mr Ahearne also told the inquiry that he “expressed concern” in 2007 about data from the Department of the Environment that showed that one in three new homebuyers in 2006 took out a 100 per cent mortgage.

In addition to his concern regarding mortgage levels, Mr Ahearne said the number of first-time buyers taking out loans with little or no deposit doubled in 2006 from the year before. “Worryingly, nearly two thirds of all new home mortgages taken out in 2006 were over 31-35 years or longer,” he said. “Such heavy borrowing rendered many households very vulnerable to a downturn.”

Mr Ahearne said his own perspective on the Irish housing market during the bubble years was informed in large part by research on the international experience with housing booms and busts that he conducted while working for the US Federal Reserve.

He said the international experience showed that “periods of prolonged rises followed by protracted falls are a surprisingly common feature of house prices in advanced countries”.

He also said there were indications that certain financial conditions, such as low interest rates and financial deregulation, are usually present in past house price surges, though other factors such as demographics and buoyant income growth also help explain these booms.

At the time, he said, interest rates in Ireland were at “very low levels”, with the European Central Bank’s main policy rate at 2 per cent, having been cut from a peak of 4¾ per cent in 2000.

“It was clear at the time that such low interest rates were not appropriate for Ireland’s rapidly growing economy,” he said.

Mr Ahearne also said that housing bubbles “are intrinsically hard to identify” and that this was “especially while they are occurring”.

“This is because it is very difficult to differentiate between price changes coming from underlying economic fundamentals - some of which are unknown, unobservable, or unquantifiable - and those based on so-called “irrational exuberance,” he added.