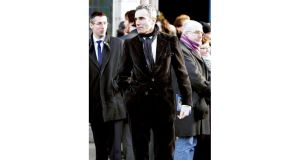 “HE WAS a rare man, a gentleman,” is how actor Daniel Day Lewis began his tribute to Irish Timesfilm correspondent Michael Dwyer, whose funeral took place at the Church of the Holy Name in Ranelagh, Dublin, yesterday.

Speaking to a packed church of relatives, friends, colleagues and members of Ireland’s film and arts community, Day Lewis described Dwyer, whom he had known for more than 20 years, as “gentle, modest and kind” and praised his enthusiasm for film and his ability to remain compassionate even in criticism. “He was never cruel, ever, nor was he self-serving.”

Day Lewis also made reference in his eulogy to Dwyer’s strong connection with the Dublin Film Festival, which the film correspondent had co-founded and which went on to become the Jameson Dublin International Film Festival.

“I have nothing against whiskey, but I would love to think that from now on that festival could be renamed after him,” he said.

“His life directed our attention beyond the village, beyond sameness, outwards,” said Fr Kennedy. “His interest and his energy positively drew us into another world, where representation of life was different, where the other view was possible.” Fr Kennedy said Dwyer had “led us, through his wide interest in cinema, to other conduits of understanding.”

He also praised Dwyer’s interest in the “other way of viewing, in the other way of being”. “His energy brought about a certain transformation.”

RTÉ newsreader Aengus Mac Grianna read out a personal tribute from Jennings at the service. “He was my soulmate and I his. He was my mentor and I his. He was my companion in bad times and good . . . My darling, beautiful, gorgeous man is gone, but Michael, I will love you forever,” it read.

Mr Jennings’s father Tony also spoke at the service on behalf of Mr Dwyer’s sisters and his mother Mary, who was unable to attend.

Along with the bread and wine, a photograph of Mr Dwyer’s and Mr Jennings’s two cats Fred and Ginger; the Chevalier Des Artes et Lettres award to Mr Dwyer by the French government in 2006; his Volta Award for Lifetime Achievement from the Dublin International Film Festival, and the Kerry colours representing his native county, were part of the offertory procession.

They were brought up by his sisters Anne Lyons and Maria Barrett, by Mr Jennings and by family members Nicholas Barrett, Timmy Barrett and Jimmy Lyons.

Music at the ceremony was provided by Finbar Furey and Francie Conway. The prayers of the faithful were read by the Jameson Dublin International Film Festival director Gráinne Humphreys, film festival co-founder and Wexford Festival Opera chief executive David McLoughlin and RTÉ newsreader Susan Jackson, among others.

Also present were film critic Donald Clarke, Ticket editor Conor Goodman and many other friends and colleagues from The Irish Times.

Mr Dwyer, who wrote for The Irish Timesfor more than 20 years, died on January 1st at the age of 58, following an illness.

0:36 Joe Biden tells a black interviewer that 'he ain't black' if he supports Trump

1 Pricewatch: Left on the shelf - what we are no longer buying
2 Ireland’s coronavirus restrictions may lift more quickly if case numbers keep falling
3 Coronavirus: 35,600 people come off unemployment payment after return to work
4 Tax on Covid-19 payment could cause 'terrible shock' late in year
5 Archaeologists are ‘quite sure’ they have found Red Hugh O’Donnell’s burial place
Real news has value SUBSCRIBE

Coronavirus: People told not to make appointments to buy furniture 13:04
Tiger shines and Brady bites back as charity match proves an enjoyable release 13:03
Iranian petrol tanker arrives in Venezuela in defiance of US 13:00
Unidentified man has been in Irish psychiatric hospital for 30 years 12:54
Could Disney World be the NBA’s knight in shining armour? 12:42