Maureen Dowd: Dear Donald, you were just played for a sucker

House Republican leaders have pulled their bill to repeal the Affordable Care Act, also known as Obamacare, signaling a significant failure on what was supposed to be a major legislative accomplishment for President Donald Trump. Video: Reuters 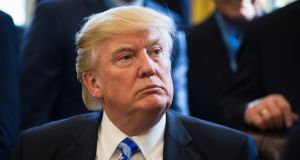 US president Donald Trump. “You got worked over by the Republican leadership and the business community, who set you up to do their bidding.” Photograph: Al Drago/The New York Times

Dear Donald, We’ve known each other a long time, so I think I can be blunt. You know how you said at campaign rallies that you did not like being identified as a politician? Don’t worry. No one will ever mistake you for a politician. After this past week, they won’t even mistake you for a top-notch negotiator.

I was born in Washington. The first image in my memory bank is the Capitol, all lit up at night. And my primary observation about DC is this: unless you’re careful, you end up turning into what you started out scorning. And you, Donald, are getting a reputation as a sucker. And worse, a sucker who is a tool of the DC establishment. Your whole campaign was mocking your rivals and the Washington elite, pontificating about how Americans had turned into losers, with our bad deals and open borders and the Obamacare “disaster”. And you were going to fly in on your gilded plane and fix all that in a snap.

Reagan had one key quality that you don’t have: he knew what he didn’t know

You mused that a good role model would be Ronald Reagan. As you saw it, Reagan was a big, good-looking guy with a famous pompadour; he had also been a Democrat and an entertainer. But Reagan had one key quality that you don’t have: he knew what he didn’t know.

You both resembled Macy’s Thanksgiving Day balloons, floating above the nitty-gritty and focusing on a few big thoughts. But Reagan was confident enough as president to accept that he needed experts below, deftly manoeuvring the strings. You’re just careering around on your own, crashing into buildings and losing altitude, growling at the cameras and spewing nasty conspiracy theories, instead of offering a sunny smile, bipartisanship, optimism and professionalism.

You knew the Republicans were full of hot air

You promised to get the best people around you in the White House, the best of the best. In fact, “best” is one of your favourite words. Instead, you dragged that motley skeleton crew into the White House and let them create a feuding, leaking, belligerent, conspiratorial, sycophantic atmosphere. Instead of a smooth, classy operator like James Baker, you have a Manichaean anarchist in Steve Bannon.

You knew the Republicans were full of hot air. They haven’t had to pass anything in a long time, and they have no aptitude for governing. To paraphrase an old Barney Frank line, asking the Republicans to govern is like asking Frank to judge the Miss America contest – “If your heart’s not in it, you don’t do a very good job.”

You knew that Paul Ryan’s vaunted reputation as a policy wonk was fake news. Republicans have been running on repealing and replacing Obamacare for years and they never even bothered to come up with a valid alternative. And neither did you, despite all your promises to replace Obamacare with “something terrific” because you wanted everyone to be covered. Instead, you sold the dead-on-arrival Bill the Irish undertaker gave you as if it were a luxury apartment, ignoring the fact that it was a cruel flimflam, a huge tax cut for the rich disguised as a healthcare Bill. You were so concerned with the “win” that you forgot your “forgotten” Americans, the older, poorer people in rural areas who would be hurt by the Bill.

As the New York Times’s chief Washington correspondent Carl Hulse put it, the GOP falls into clover with a lock on the White House and both houses of Congress, and what’s the first thing it does? Slip on a banana peel. Incompetence Inc. “They tried to sweeten the deal at the end by offering a more expensive Bill with fewer health benefits, but alas, it wasn’t enough”, former Obama speechwriter Jon Favreau slyly tweeted. Despite the best efforts of Bannon to act as if the whole fiasco was a clever way to bury Ryan – a man he disdains as “the embodiment of the ‘globalist-corporatist’ Republican elite,” as Gabriel Sherman put it in New York magazine – it won’t work.

And you can jump on the phone with the New York Times’s Maggie Haberman and the Washington Post’s Robert Costa – ignoring that you’ve labelled them the “fake media” – and act like you’re in control. You can say that people should have waited for “phase two” and “phase three” – whatever they would have been – and that Obamacare is going to explode and that the Democrats are going to get the blame. But it doesn’t work that way. You own it now.

You’re all about flashy marketing so you didn’t notice that the Bill was junk, so lame that even Republicans skittered away. You were humiliated right out of the chute by the establishment guys who hooked you into their agenda – a huge transfer of wealth to rich people – and drew you away from your own.

You got played. It took W years to smash everything. You’re way ahead of schedule

You sold yourself as the businessman who could shake things up and make Washington work again. Instead, you got worked over by the Republican leadership and the business community, who set you up to do their bidding. That’s why they’re putting up with all your craziness about Russia and wiretapping and unending lies and rattling our allies. They’re counting on you being a delusional dupe who didn’t even know what was in the Bill because you’re sitting around in a bathrobe getting your information from wackadoodles on Fox News and then, as the Post reported, peppering aides with the query: “Is this really a good Bill?”

You got played. It took W years to smash everything. You’re way ahead of schedule. And I can say you’re doing badly, because I’m a columnist, and you’re not. Say hello to everybody, okay?