Video: This land is Mayan

Indigenous communities in Guatemala, pushed off the land so biofuels can be cultivated, are struggling to survive – and it’s our fault, writes Aidan Gillen 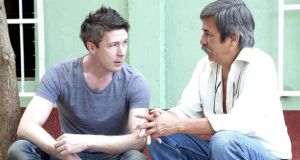 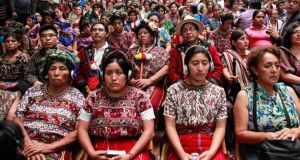 Indigenous Mayan women listen to translators at the hearing of Rios Montt, former leader of Guatemala, the first former head of state to be charged with genocide in a domestic court. Photograph: Elena Hermosa/Trócaire

I’m sitting with Juana Laj Ical outside her temporary dwelling a little off a bumpy road in the Polochic valley region of Guatemala. It’s baking hot and while this place provides adequate shelter, it is just a temporary dwelling. Along with the 20 other families who live here, Juana is waiting to move to somewhere more permanent. They have been on this plot of land, rented from a neighbouring community, for two years however. It looks bearable enough at first – a collection of wooden houses at a bend in a river across a 130-year-old iron bridge – until you’re crossing the bridge that is, escorted by the children who live here.

There are broken planks with gaps big enough for an adult to fall through, down the 30 feet to the shallow riverbed below. The children hop and skip over the gaps without a second thought, though it’s alarming to witness.

The people are indigenous Mayans, members of the Rio Frio community, some of the 800 families who on March 15th, 2011 were forcibly evicted from the land they’d been living on and farming nearby. For “forcibly” think: no time to gather belongings, terrified children, crops destroyed, houses burnt, one man – Antonio Beb Ac – killed. There have been two more related deaths since – Oscar Reyes, the following May when he returned to the site to collect maize, and Maria Margarita Che Chub, a community leader, who was assassinated the following month.

To understand what happened to the Rio Frio community, you have to understand that the Mayan people’s relationship with the land is a mystical thing. It is central to their lives and identity. They treat it with great respect and not as a commodity that can or should be bought or owned. So when a force of about 1,000 police, army and private security guards show up and wreck the place, it’s soul destroying, and on the part of the aggressors, that’s precisely the idea.

Juana has seen it all, from the 1978 massacre of up to 100 peasants protesting over land rights and abysmal working conditions in the nearby town of Panzos, to the death squads that roamed the country wiping out indigenous communities as part of a “scorched earth” policy, designed to eliminate support for Marxist rebels in the 1980s.

This is the kind of thing that happened during the 36-year civil war: government-initiated paramilitary group operatives or State military arrive, separate the community into men, women and children, rape the women, kill the men, kill the children, kill most of the women, killing pregnant ones by cutting their bellies open and letting them bleed to death. They then burn the town, bury everything and everyone. According to the 1999 Truth Commission report into human rights’ violations during those times, up to 160,000 Mayan indigenous people and 40,000 mixed race Ladinos went this way. While we were there, they were still digging them up to prove it had happened.

On May 10th, the former military dictator and de facto president of Guatemala, Efraín Ríos Montt, was found guilty of genocide and crimes against humanity, specifically the massacre of at least 1,771 Ixil Mayans in the country’s western highlands. This was the first time a former head of state had been tried for genocide in their own country. He was sentenced to 80 years in jail, but on May 21st the country’s constitutional court quashed the verdict and ordered a re-trial.

Food Not Fuel from Trocaire on Vimeo.

Many people struggled long and hard to have this case heard and many have paid with their lives. People who speak up for ordinary Guatemalans are regularly silenced. Journalists, lawyers, environmentalists, community leaders and human rights’ defenders have been killed at an alarming rate.

For people like Juana, the outcome of this trial is hugely important. For decades, they doubted they were ever going to be listened to properly. It took the determination of the particularly courageous attorney general, Claudia Paz y Paz, to bring the trial forward. She’s the country’s first female attorney general and that, no doubt, is also a factor.

Despite seeming calm, Juana is not. Suffering from anxiety, she’s scared a lot and says she feels like she’s going to die but that she wants to see this through. She wants to fight for land rights and the rights of her people. Last year, along with 4,000 others, Juana marched for nine days to Guatemala City to demand government action on land rights for indigenous people. A government protection order was issued which promised land and housing for her community but nothing has happened.

More than two years after the eviction, all they want is land to live on and to grow simple food. “The land belongs to my ancestors and it was taken away by these businessmen and big landowners,” Juana says. “We had everything we needed to survive. We grew maize, beans and chilli. We only grew what we needed to survive.”

Guatemala gained independence from Spain 190 years ago but real power never went to the state, which remained an instrument in wealth-building for a tiny elite. Today, 80 per cent of the country is owned by 3 per cent of the people.

Guatemala is largely a beautiful lush country with an abundance of crops, but now people are dying of malnutrition here. A lot of the Rio Frio kids I mentioned earlier have distended stomachs and runny eyes. Not all of them, not yet, but it probably won’t be long before food shortages bring ill-health to the rest.

The reason for the latest chapter in this country’s land crisis is this: in 2009 the EU issued its Renewable Energy Directive, which tied member states to ensuring that 10 per cent of their transport fuels be derived from renewable sources, mostly biofuels, by 2020. This created a huge market for biocombustible crops such as sugarcane and African palm, perfectly suited to growing in Guatemala. Hundreds of thousands of acres are being sown with sugar cane and African palm.

Indigenous people, such as the Rio Frio community, are being pushed off the land to make space for biofuel crops. Factor in that these landowners have a habit and history of cheating the indigenous people out of land and labour and you’ll get the picture: communities like the Rio Frio people who’ve lived on land that they’ve believed to be theirs for generations are now being pushed off violently, and they’ll move because they’re in fear for their lives. History has taught them that when the people with the guns show up, you do what they say.

The peace accords, written up at the end of the civil war in 1996, never came to much. Most of the recommendations were voted down in referendums. Most indigenous people don’t vote, or they may vote for who they’re told to vote for on the plantations they work on, sometimes for ridiculously low wages.

The EU has belatedly realised that its directive is having a negative impact on the poor here and have backtracked slightly, reducing the biofuel requirement to 5 per cent. However, that reduction has not stopped these crops being grown: over 20 per cent of farmed land here is now under sugar cane or African palm and it’s increasing. Less and less land is available to grow food for Guatemalans. Maize prices have tripled, and people are starting to die.

It’s very easy to see who the villains are, and, right now, they are working for us.

Blessington lakeside home with room to roam for €795,000

Ask the Expert: My partner’s smoking again and I hate it