Travel writer, Ecuador: "I felt sick. I wanted to vomit all over the police officer's desk"

In the first of a series of reader submissions to the Irish Times Amateur Travel Writer competition, we meet Rachel Creane, four hours after she arrived in Ecuador and experienced every tourist's nightmare 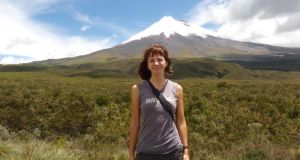 Rachel Creane: In the couple of weeks that followed, stranded in Ecuador, we undertook the considerable hike up Ecuador’s Cotopaxi, one of the world's highest volcanoes 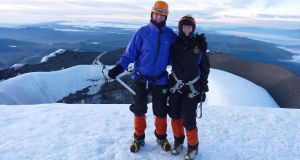 I felt sick. I wanted to vomit all over the police officer’s desk. Travelling, you are mentally prepared for more ‘manageable’ emergencies. A stolen wallet, a snatched camera, a bout of traveller’s diarrhea. You always have backup - and Imodium. These things are all easily solvable.

But nothing quite prepares you for having absolutely everything stolen. Everything, including your backup (and Imodium). So when the police asked me for some ID, I was torn between making a particularly scathing remark or just starting to wail all over again.

The latter occurred involuntarily. I had just entered Ecuador from Colombia a few hours earlier and the robbery took place on our bus from the border. Ecuador was country number 22 on a round-the-world-by-land-and-sea-only adventure, which my boyfriend and I started 10 months earlier in Amsterdam. It had taken us from Europe, through Central Asia, China, South East Asia, Australasia, and across the Pacific. The plan after Ecuador was to venture down as far as Peru and then up through Central America, North America and back to Europe – a plan that was now in jeopardy.

What was I doing in this godforsaken land where I was robbed blind within four hours of entering? As far as I was concerned the whole country was responsible - children, invalids and animals included. They had all beguiled us with their tourist-robbing tricks, relieving me of my backpack, including my journals from the last 10 months, the few knick-knacks I had picked up in various places, my precious laptop, and my passport that I had put there "temporarily" having just needed it a few hours earlier at the border. In the hubbub that followed my realisation that I had been robbed, a small crowd had gathered around us. One of them successfully relieving my boyfriend of his camera. Now we were the robbed who were robbed.

Talk about being kicked when you are down. Ironically, my camera was my only thing that wasn’t stolen, confirming my suspicions that we were the perfect travelling team. We’d swum with sharks in Indonesia; we’d visited a market in Afghanistan. We were invincible travellers! But now I just felt vulnerable and frightened.

“I just want to go home,” I sobbed to the wide-eyed and teenage-looking police officer who spoke no English, and looked as if he would rather be doing just about anything other than dealing with me. “Given that you no longer have a passport, we’re here for a while,” sighed my boyfriend, not yet schooled in the art of empathy. In the couple of weeks that followed, stranded in Ecuador, which I reluctantly admitted is a country of fantastic natural beauty and cultural heritage, we undertook the considerable hike up Ecuador’s Cotopaxi, one of the worlds’ highest volcanoes. Not a venture to be taken lightly, it requires several weeks of altitude acclimatisation.

The grueling climb itself involves ice-axes, crampons, harnesses, and a midnight start to avoid any melting ice in the heat of the day’s sun. Only one in every two climbers reaches the summit. For me, it was more than a climb to a 6,000m summit. I had to prove to myself that my travelling-spirit was not broken. I was going to finish this journey that I started several continents ago. After all, what are some things, now in rubbish tips across the country or changing hands in back-alley markets. They're exactly that: just things.

As we dragged our heaving breathless bodies onto the summit, and the sun’s first rays reached us, I knew that a new day in our adventure had dawned. This traveller is not heading home just yet.