With war and conflict affecting some popular tourist haunts this summer, more people are returning to old reliables such as Spain. Conor Pope finds 10 of the more offbeat – and affordable – destinations 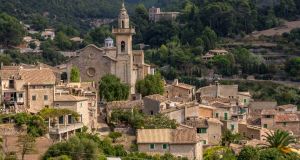 What you will get are great beach-side restaurants serving cheap-as-chips food to discerning locals and breezes coming in off the Atlantic to keep it cooler than the more familiar Andaluz coastal stretch from Marbella to Malaga. Conil is also within touching distance of Morocco, if you fancy a day trip, and a 30-minute drive away from some of the best surf in Europe. The old town of Vejer de la Frontera is worth a day trip as well.

Approach Conil in July and August with caution, as this is when all of Spain appears to decamp here.

How: Ryanair to Seville or Jerez
Learn more: goo.gl/aZmHrZ

Valldemossa, Mallorca
Why: Those who happen upon this pretty village on the biggest of the Balearics do so either by accident or as day-trippers from the beach resorts dotted around Palma less than 20km away. Valldemossa might not be a typical Spanish holiday destination, but that’s what gives it much of its appeal.

The actual village is small and full of charming labyrinthine streets. Because it’s not a beachside place (the nearest swimable seas are around 6km away), the cost of villas are substantially less than you might otherwise pay. If you rent a place with a pool and buy your food from local markets, you’ll get an unique and super-chilled holiday for a song.

Gijón and the Picos de Europa, Asturias
Why: The most beautiful, most complex – and possibly most impenetrable – province in Spain is the one most Irish know virtually nothing about. Widely regarded as Spain’s gastronomic heart, Asturias is at the centre of the Costa Verde, which is green because it doesn’t get unbroken summer sunshine. But what it lacks in sun it makes up for in variety.

Gijón is Asturias’s largest coastal town and less than two hours from Ryanair- served Santander. Its urban beaches are pleasant and the seafood is frequently stunning. Go east from Gijón and you will find remote beaches and coves and ridiculously pretty towns such as Ribadesella and Llanes. Head inland to the Picos de Europa mountain range to find wild woods, wide lakes, wild boars and bears, as well as countless villages where a near impenetrable dialect, bable (“bah-blay”) – can still heard.

Oviedo, Asturias’s administrative capital, is a lively student hub awash in Celtic traditions and free-flowing cider poured in a way that has to be seen to be believed. When there, make sure to eat the fabada and the Cabrales. You’ll be glad you did.

Las Alpujarras, Grenada
Why: This gem of a spot is less than two hours inland from Malaga and the madness of the Costa del Sol, but it might as well be on a different planet. It sits under the shadow of Sierra Nevada, Spain’s highest peak, and you will surely take home memories of the mountain’s sometimes chilly presence and all the gorgeous little flat-roofed villages with outsized chimneys that spill down its sharply inclined sides.

Las Alpujarras is just 40 minutes from the grandeur of Granada, so its Moorish history is hard to miss. Villas can be sourced cheaply, the restaurants are delightfully cheap, and the sun does shine.

How: Both Aer Lingus and Ryanair fly to Malaga
Learn more: goo.gl/REtVPs

Altea, Alicante
Why: Even those who haven’t been to Benidorm know it’s not a place for sun-kissed afternoons gorging on garlic-drenched gambas and sipping crisp white wines. Quite the opposite.

It was one of the first unfortunate towns in southern Spain to be over-developed, and came to exemplify how lousy holidays can be when greedy developers and ignorant tourists come together in search of cheap sun and Sangria (shouted with an Essex twang).

Less than 30 minutes away from Benidorm is Altea. This postcard pretty, jasmine-fragranced, whitewashed town has narrow cobblestone streets that snake out from a Plaza Mayorm with a beautiful blue-domed church at its heart.

This is the kind of town the denizens of Madrid decamp to in the dead heat of summer. The promenade is lovely for late-evening strolls and the restaurants serve delicious fresh food and locally produced wines at prices Irish tourist can scarcely fathom. The beaches, meanwhile, are unspoiled by hordes of Los Giris (the less than affectionate name Spaniards have for us).

Tarbaca Island, with its marine reserve and stunning snorkelling, is an hour’s boat ride away. The water parks of Benidorm are also with easy reach. (Hey, just because we look down our noses at the big resort towns doesn’t mean we don’t enjoy a massive slide as much as the next person.)

How: Aer Lingus and Ryanair to Alicante
Learn more: goo.gl/kmbNiZ

Baiona, Galicia
Why: The only thing most Irish people know about Galicia is its Camino and the city of Santiago de Compestela, where the famous walk of St James comes to its dusty conclusion. But the autonomous region has more to offer, such as this gorgeous resort town. At weekends Baiona attracts clubbers from around its stunning bay. The seafood restaurants are legendary, and you will struggle to get a bad or expensive meal anywhere. The town’s parador sits in a converted fort on the fringes of the town. Its location is stunning, the rooms are big and, if you’re lucky enough to be given one facing the seafront, you can fall asleep to the sound of waves crashing against the shore less than 100m from your window.

Because it is in south Galicia, Baiona gets warmer weather and less rain than some of the locations to be found further north. |

Palafrugell, Catalonia
Why: The Catalan coast north and south of Barcelona can be hit or miss. Some towns – think Tarragona – are a sleepy joy to happen upon. Others (ie Salou) are somewhat less joyous. Palafrugell is north of the Catalan capital and less frequented by the tourist hoards. It is elegant and sleepy, comes with gorgeously unspoiled coves, cliff walks and, if you have a car, must-visit nearby towns and villages, including Cadaques, which was made famous by Salvador Dalí. He described L’Hostal, a Cadaqués bar, as the most beautiful place on Earth .

Palafrugell is also within easy striking distance of party towns such as Sitges and, of course, Barcelona.

Santillana del Mar and Laredo, Cantabria
Why: Santillana del Mar is known locally as the town of the three lies: it isn’t remotely holy (santi), it’s not at all flat (llana), and it’s not even by the sea (del mar). But it is a medieval jewel in the crown of northern Spain and a must-see spot, particularly for visiting the prehistoric caves at nearby Altamira.

Laredo, some 70km away, is one of the most popular tourist towns on the Cantabrian coast. When you see the beautiful beaches in the region, you will know why. La Salvé, in particular, is an immense stretch of sand that runs to 5km; you could spend days wandering it without hearing English spoken.

Cartagena and Murcia
Why: Murcia is in the southeast and gifted with the Mediterranean sun. It also has more than 250km of comparatively undeveloped beaches and will be more accessible than ever from this summer, when Aer Lingus begins flying directly from Dublin. The city of Murcia, with its laid-back student vibe, is worth a visit. But for history, the place to be is Cartegena, a major military port for more than 2,000 years.

Nearby is La Manga del Mar Menor, a resort area that has hundreds of hotels, bars, restaurants and all the sun you can soak up.

Logroño (La Rioja)
Why: It would be unforgivable to write about the hidden gems of Spain and ignore its wine. It may not be as universally regarded as France or Italy, but some of today’s Spanish wines are as good as anything anywhere else in the world. Almost every province makes its own, with the whites from Rias Baixas, the reds from Ribera del Duero and the bubbles from Catalunya all standing tall. And no Spanish wines stand taller than those that come from La Rioja.

The city of Logroño is at the heart of the province and a good base for exploring. It is not as pretty as some others, but plan your journey right and you will be too busy eating and drinking to notice the absence of stunning scenery and seas to swim in.

Where are the best value lunch spots in Ireland?
Real news has value SUBSCRIBE