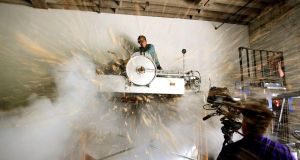 Two museums devoted to food, in London and New York, open this week.

First up is the British Museum of Food, left, (bompasandparr.com; £5/€6.80), which opened yesterday in London’s Borough Market and claims to be the world’s first cultural institution entirely devoted to the history, evolution, science and sociology of food. Exhibits include historical menus, food as art and an exploration of peristalsis, which are the muscle contractions that move food through the digestive tract.

On Wednesday, it’s the turn of the Museum of Food and Drink,

(mofad.com; $10/€8.80) in Brooklyn, whose opening exhibition is called Making it and Faking It and includes an analysis of the classic hamburger. Its main selling point are that you can eat some of the exhibits and the museum has no plans to affiliate with any brands in order to maintain “its spirit of independence”

The new Bond film, Spectre, gets its Irish release on Monday, and for the 24th time we get to see James pursue baddies and Bond girls but still find the time to enjoy a martini and some of the world’s fanciest hotels. Here’s five that have featured throughout the years:

Hotel Cipriani, Venice (Giudecca 10; belmond.com; rooms from €1,500) Venice’s classiest hotel, home to 79 luxurious suites, is where Daniel Craig moored his boat (and where cast and crew lodged) in Casino Royale. The hotel reopens in March 2016 after a major refurb.

Hotel New Otani, Tokyo (4-1 KioI-Cho, Chiyoda-Ku; newotani.co.jp; rooms from €425) Famous for its revolving restaurant and 400-year-old gardens, this elegant business hotel, built in 1964, served as the HQ for Spectre front Osato Chemicals in 1967’s You Only Live Twice. It’s been upgraded since, so no sign of Blofeld or his cast of badly acting baddies, just contemporary luxury.

One & Only Ocean Club, Bahamas (Casino Dr; oceanclub.oneandonlyresorts.com; rooms from €525) Walk through the lobby and you’re keeping step with Daniel Craig in Casino Royale, although you’ll need more than luck to win an Aston Martin in a hand of poker. Your consolation is a stunning room that comes with a personal butler.

Peninsula Hong Kong (Salisbury Rd, Tsim Sha Tsui; peninsula.com; rooms from €450) In The Man With the Golden Gun, Roger Moore followed Bond girl Andrea Anders to Room 602 of Hong Kong’s most famous hotel, a byword for colonial elegance and five-star luxury: its fleet of green Rolls Royce Silver Shadows is just as it appeared in the film.

Taj Lake Palace, Udaipur (tajhotels.com; rooms from €600) The white floating marble palace that is the icon of Udaipur also served as Octopussy’s lair in the 1983 film. Octopussy is seen swimming naked in the hotel’s lily pond, which is overlooked by the most affordable rooms. To live like a maharaja you’ll need to check into one of the suites.

The free wifi in some of the world’s hottest tourist spots is a prime target for hackers, according to a new study by internet security firm Skycure. The most vulnerable areas are Times Square in New York (right), followed by Notre Dame in Paris, Disneyland Paris and Golden Gate Park in San Francisco. Rome’s St Peter’s Square and the Grand Palace in Bangkok made the list while London’s Trafalgar Square showed 10 dodgy spots. Skycure’s advice is for travellers to avoid free wifi networks altogether, but if tempted, never log into bank accounts or any website where you might share credit card details. It suggests loading your mobile device with a virtual private network (VPN) for greater protection against hacking.

LIMBERING UP FOR GAY SKI WEEK

The Arosa resort in central Switzerland is preparing to host the 12th Gay Ski Week, which will run from January 10th-17th, 2016. The festival has grown to become one of the biggest winter events on the European LGBT calendar. This year there’ll be daily après-ski parties, cabaret shows, disco ice-skating, moonlight sledding, pool parties and classical concerts, while en piste activities include a drag ski race. There is over 225km of skiable terrain and the runs suit all levels of proficiency. Five-day packages in three-star accommodation from snowtrex.ie (not including flights) start at around €700. See gayskiweek.ch

Aer Lingus launched its new daily service to Liverpool yesterday, which will see 16 flights per week between Dublin and John Lennon Airport.

The return flights leave Liverpool at 8.15am and 7.25pm, with the third service departing at 3.35pm. See aerlingus.com

Faithlegg House Hotel & Golf Resort (faithlegg.com) in Co Waterford is in the last week of its Paint the Fairways Pink package for Breast Cancer Awareness month, which includes a round of golf and an overnight stay from €119 per person sharing. Cashel House Hotel (cashelhouse.ie) in Connemara has a two-night B&B, one dinner deal from €165 per person: on October 31st the deal includes a guided walk to a famine village. Coopershill House (coopershill.com) in Co Sligo has a two-night, one dinner deal from €239 per person sharing, and you can bring your dog

STAY Fairmont Bab Al Bahr (Bain Al Jessrain, Khor Al Maqta; fairmont.com; rooms from €150) Behind the glass front is one of the most elegant mid-range hotels in town.