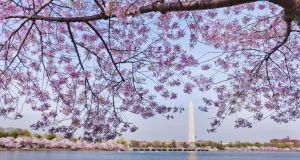 This is the nicest time of the year to visit Washington, DC. The weather is usually ideal and the city is celebrating the National Cherry Blossom Festival, which began on March 20th but will climax between April 11th-14th, according to the National Park Service. The Washington Post said April 9th-13th is when 70 per cent of the city’s Yoshino cherry blossoms will reach peak bloom, bathing the city in soft pink and snowy white. The cherry blossoms grow around the Tidal Basin in West Potomac Park, Hains Point in East Potomac Park and on the grounds of the Washington Monument. On April 11th there is a a parade followed by Sakura Matsuri, the Japanese Street Festival on 12th St and Pennsylvania Avenue.

United Airlines (united.com) has a direct service from Dublin to Washington, DC from about €660 return in mid-April. See nationalcherryblossomfestival.org 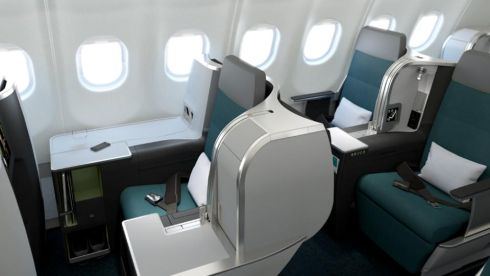 Aer Lingus rolled out its new business class cabin this week on its transatlantic services with lead-in fares from €899 each way from Dublin to New York, €999 to Boston and €1,759 to San Francisco. Tickets must be booked before April 7th and are valid for travel from May 1st to October 31st.

The new-look cabin includes a 55.8cm-wide seat that folds down to a fully-flat two-metre bed, a menu focusing on Irish produce (Lambay Island beef, Burren Smokehouse salmon, St Tola goats’ cheese – pictured left – and more) and a new amenities kit with a range of Voya products. It has also opened a new Gold Circle Lounge in New York’s JFK Airport this week.

Trump International Doonbeg (trumphotelcollection.com) has a Suite Spring Break from €180 that includes a B&B in a suite.

Lough Eske Castle (solishotels.com) in Donegal is offering three nights’ B&B for €460 for two sharing a deluxe room. The offer is valid midweek only and is available until May 31st.

Also valid until the end of May is the midweek Afternoon Tea Break at the Radisson Blu Farnham Estate (farnhamestate.ie) in Cavan. For €225 for two you get B&B and dinner in the Botanica Restaurant, plus afternoon tea in the Drawing Rooms.

Night flight over the Thames

The Emirates Air Line cable car in London has added night flights this week to its schedule.

The cable car, which crosses the river Thames between Greenwich Peninsula and the Royal Docks, will operate a night service between 7pm and 11pm (to 10pm Sunday to Thursday) until the end of September. The “night flight” takes about 25 minutes and the cabins – which come every 30 seconds or so – have been wired for music and video. 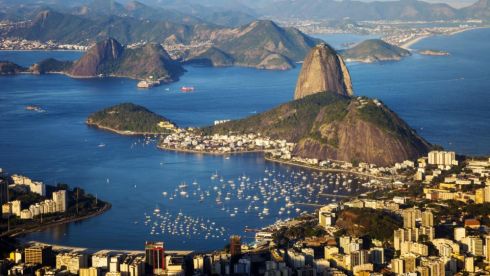 Climb the Pão de Açúcar
(bondinho.com.br)
The cable car ascent to the top of the Sugarloaf is a scenic must that will not disappoint. 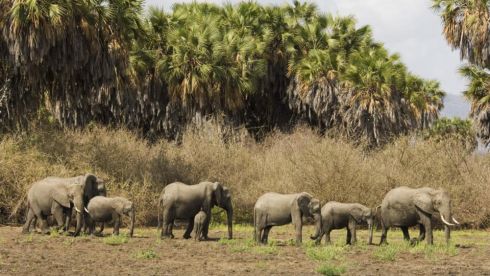 Travel for the total elcipse

If you missed the total eclipse on March 20th because of the dense bank of cloud, fear not, you don’t have to wait until September 23rd, 2090, for the next one.

The elliptical path of this solar eclipse will pan across Indonesia on March 9th, 2016, plunging south Sumatra, south Borneo and central Sulawesi into darkness for about two minutes.

On September 1st, 2016, visitors in the southern part of the Selous Game Reserve in Tanzania will be able to observe a ring-shaped eclipse for about three minutes, in a part of the world with virtually no light pollution.

Finally, the United States gets its turn on August 21st, 2017 when the eclipse’s path will pan across the middle of the country from South Carolina to Oregon.

It’s not nearly as well known as Burning Man, but Afrikaburn, a week-long festival on a farm called Stonehenge by the Tankwa Karoo National Park about 400km (250 miles) north of Cape Town from April 27th, has been growing steadily in popularity since its inception in 2007. Here are five tours to get to know Cape Town and its environs.

Visitors meet local creatives – designers, artists and foodies – to explore a theme of South African history and life, from revolution to wine-making.

This tour of the Mandela Park township (Imizamo Yethu in Hout Bay) includes an authentic evening meal that is preceded by singing and dancing.

The former chairman of the Wine Tasters Guild of South Africa is your guide in a tour to the winery of your choice.

Explore the Gugulethu township about 15km from the city in the informed company of local Laura Ndukwana. There’s a cooking tour and another where you attend a Sunday service in an evangelist church.

Like all the best township tours, half the money goes toward the projects you visit along the way, which could be anything from an organic farm to a shelter for victims of domestic violence.