Steal away to write that novel

Fancy a room of your own to get your creativity going? A suitably inspiring space awaits you at a writers’ retreat 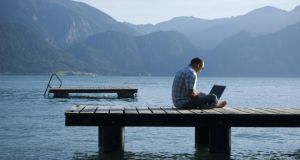 In 1998 Sue Booth-Forbes, an American teacher, writer and editor who had been running creative retreats on a voluntary basis in Boston, decided to change her life following divorce.

With two friends, she rented a house at Eyries, on the Beara Peninsula in west Cork, for a month-long break devoted to writing.

So inspiring was the experience that she ended up buying a house there and turning it into a dedicated writers’ retreat. Anam Cara, as she called it, has been offering writers a quiet space in which to work ever since.

“It is a way of getting away from the ‘dailyness’ of daily life to work on your creativity,” she explains. “Writers and artists staying here get together for breakfast and dinner but the hours of the day are quiet, working hours. Guests have no responsibilities but to themselves and their craft.”

It costs €600-€700 a week to stay here, and you don’t have to be a published author or a galleried artist to attend. “Anam Cara is for anyone, whether they are just thinking about it or are professionals,” says Booth-Forbes, whose walls are lined with more than 500 books written by former guests.

“Part of what makes it work is that everyone who has come here dedicates, or rededicates, themselves to the creative part of their life,” says Booth-Forbes, who believes the rural silence is particularly conducive to creativity. “The only noise here is an occasional tractor. As you settle in, first the external noise goes away, then the general noise in your head goes away and finally you can hear your inner voice.”

Of course, not everyone’s inner voice says anything worth hearing but of those that do, some of the best will have stayed at the Tyrone Guthrie Centre in Monaghan, the most famous literary retreat in the country. The house here, Annaghmakerrig, was bequeathed to the State by the eponymous British theatre director, with a proviso that it be used for the benefit of artists. It opened as a residential retreat in 1981.

You have to apply to stay here, with a week’s full board costing €300 in the main house and €150, on a self-catering basis, in one of its farmyard cottages. Bursaries are available from a number of local authorities to help cover the costs.

Dinner is served in the Big House at 7pm and the one stipulation laid down by Guthrie in his will is that residents should gather for a meal once a day. This emphasis on communal dining is an important part of the retreat experience, according to Booth-Forbes. “When you bring creative people together a lot of cross pollination and synergies can result,” she explains.

You’ll need more than a conviction that you have a novel in you to get into Annaghmakerrig, however. “You’d need to have a reasonable track record such as, for a writer, something published in a recognised publication, ideally a book but possibly a poem. It’s not for people just looking to see if they can write,” points out centre director Robbie McDonald.

“That said, a really strong application might just be enough to get you in, after all, we are in the business of supporting, not restricting artists.”

Typically 15-20 people will be staying here at any one time, with Annaghmakerrig having played host to the biggest literary names in the country. But don’t let that put you off. “It’s actually a very homely atmosphere and not at all intimidating. Everyone is treated exactly the same regardless of who is staying,” assures McDonald.

“By day you hardly see anyone as residents tend to be working flat out to meet deadlines. Also, nowadays people have to negotiate to get their two weeks here so they really do value having the time to work on a creative issue without worrying about cooking or changing linen, and being among people who are in the same boat.” The only pressure comes from within. “We don’t correct the copybook, or check to ensure the work is done,” says McDonald.

On the other hand, if a little external pressure, or expert guidance, is required to kickstart or complete a project, a great alternative is Kilcoe Writers Retreat, located between Skibbereen and Ballydehob in West Cork. It is run by Rob Heyland, an experienced screen writer who moved here from Dalkey a decade ago in order to live as self sufficiently as possible.

“ I bought a farm in the west of Ireland to create a lifeboat for my children, a place where they could live off the land if they ever needed to,” he says.

Heyland has written prime time shows such as Whistleblower for RTÉ and Ultimate Force for ITV. While his children are now grown up and living around the world, as a professional writer he remembers times in Dalkey when it was hard to find the space and peace he needed to be creative.

“I used to rent a flat in Monkstown just so that I could work. At other times, I had a shed.”

What a fully-fledged writer’s retreat like Kilcoe offers is an opportunity to focus, says Heyland. “A writer’s capacity to find distractions is infinite. In two hours here you can get as much work done as you would in a week at home.”

Simply booking into a retreat can be a powerful declaration of intent, he points out. “People mess around for years saying I’m going to write a novel. This way, both financially and time-wise, you really commit yourself.”

It costs about €100 a day to stay here which includes his services as a coach and mentor, if required.

Heyland is also more than willing to correct the copybook, acting “as Rotweiller to those who want to make sure they produce their 1,000 words a day,” he says.

“I have found such a person most useful in the past, to make me stop waffling and get the work done. I have also produced and script-edited so I do have the skills and am keen to help people make progress into what is a great profession.”

Casa Ana, a 400-year old village house in the Alpujarras, Andalucía, Spain runs writers retreats twice a year, in June and November,
from £260 a week, including
mentoring from a writing
coach, many of whom are editors with Fish Publishing in Cork. casa-ana.com

La Muse Inn, near
Carcassonne in southern France, was set up in 2001 by two twenty something writers, offering creative individuals at all stages of their professional development an inspiring space. Rates from €395 per retreat, plus an option to stay and pay by trade barter.
lamuseinn.com

Camalot Castle Hotel, near Tintagel Island, the birthplace of King Arthur, in Cornwall, allows artists stay for free. Any artist who feels their creativity would benefit from staying can apply to its artist in residence programme.

HALD, an acronym for Housing Authors & Literature, Denmark, offers an international summer residency for writers during which four foreign fiction writers are selected to live and work alongside their Danish fiction counterparts
for four weeks starting mid July. The application deadline is 1st
April 2013.