The Galápagos: a precarious paradise 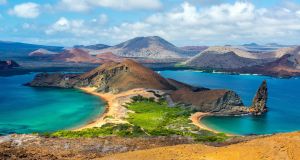 The Galápagos Islands is one of the most renowned wildlife-watching destinations in the world. Photograph: Getty

Playing an underwater game of Simon Says with a sea lion is one of those improbable encounters you come to expect when you visit the Galápagos. She approached me with her big brown eyes and began moving up and down like a synchronised swimmer. I followed suit and suddenly we were dancing. This sea lion behaved more like a pet puppy than an animal in the wild and it felt like an episode of BBC’s Planet Earth was unfolding before my eyes.

The Galápagos is an archipelago that lies 960km off the coast of Ecuador. It’s a scattering of 18 islands and is one of the most renowned wildlife-watching destinations in the world; hardly surprising as one trips over wildlife at every turn. The archipelago hosts a wide variety of landscapes including tropical beaches, stark black lava fields and lush green highlands. There are no natural predators on the islands, so wildlife has flourished and the animals tend not to run away when they see humans.

Minutes after landing at the island of San Cristobal our group heads for a nature walk – although every walk is a nature walk here. We have to side-step the scurry of flaming red Sally Lightfoot crabs which cover our walking track. A short stroll up the beach reveals a flock of Blue-footed Boobie birds; this species is well known for its clownish mating dance. They calmly sit there, indifferent to our arrival, looking comical with their big blue feet.

When Charles Darwin visited the Galápagos in 1835, it was the finches that inspired his theory of evolution. He noticed that the songbird’s beak lengths varied from island to island and he concluded that the finches evolved differently according to their environment. His findings in the Galápagos inspired the groundbreaking and controversial book On the Origin of Species which fundamentally changed how humans saw life on Earth.

Many of the island’s creatures are specially adapted to life on the Galápagos and can’t be found anywhere else. After spending time observing the Blue-footed Boobies we stroll further up the sandy beach; big black frigate birds fly overhead and dozens of marine iguanas lay basking in the sun. These prehistoric creatures are the world’s only seagoing lizards. Their size and colour vary between the islands from jet black to enable them to camouflage themselves in the lava rock, to a stunning vibrant green and red.

In the scrub surrounding the beach lie the frigates’ answer to Copper Face Jacks. Two males are attempting to score a female. They surround her and both of them inflate their red throat pouch to look like a balloon. Our guide tells us that the bird with the biggest pouch will win her affections. I don’t wait till closing time to find out who was successful; she was taking her time in choosing, a woman’s prerogative of course.

All of this happens in the first half an hour of my time on the Galápagos – and it’s not because I strike lucky; this is a typical day on my seven-day trip around the south, central and east islands.

The best way to see the Galápagos is to do a live-aboard cruise. My boat, the Monserrat, is a 10-berth cruiser with a dining area, a common area with a small library, and two sun decks. The sleeping accommodation is cramped but comfortable and the food to such a standard that it’s hard to believe it was made in the chef’s tiny galley. Our group of 20 is a mix of nationalities; among us, two Irish, and a mix of two families, couples and other solo travellers like me. The boat travells at night so most mornings we awake in a new destination waiting to be explored.

The schedule is full on the livaboard; snorkelling sessions and nature walks in the mornings, and more in the afternoons. The snorkelling is excellent – I see plenty of tropical fish – but it’s the abundance of turtles and sharks that steal the show. The turtles flap their fins like underwater wings, intermittently raising their aged heads to the surface for a gulp of air.

The sharks are a bit more disconcerting. Even though most of them measure only a metre long, there’s something unnerving about seeing their wide mouths and beady eyes coming towards me. The conditioning that Jaws did to my psyche runs deep, but these are all totally harmless.

Shark spotting from the safety of the deck becomes a favourite after-dinner pastime for our group; from up here we spot some Galápagos sharks, which are about three metres in length. Stargazing is another nightly group activity and the international crew-mates enjoyed seeing the differences in the constellations at the equator compared to those in their home countries.

The cheeky sea lions aren’t the most unusual of creatures but nevertheless they are everyone’s favourite. They spend most of the day lazing in the sun, sometimes taking over whole beaches just as humans do on the Costa del Sol. One day when waiting at Santa Cruz port a sea lion waddles along the path and pushes our group out of his way only to defecate in the middle of the circle of disgusted tourists.

Maybe the sea lion was making his own protest against us and the effect tourism is having on the islands. The number of visitors to the Galápagos has rapidly increased over the past few decades, with more than 200,000 people visiting each year now, compared to just 11,000 in 1979. With this increase comes more development, a higher risk of pollution, and the introduction of invasive species.

I am pleased to see that the national park rules are strictly adhered to by my guides. Rules include a “leave no trace” policy; you can’t visit any parts of the islands without a naturalist guide; you must stay within the clearly marked trails; and keep a distance of at least two metres from the wildlife. Visitors are encouraged to bring reusable water bottles and there is a water dispenser on board our boat where we could refill rather than buying – and discarding – bottles. Tourists should also be mindful of the biosecurity measures such as checking one’s luggage and clothes for insects and seeds.

But halting tourism completely is unrealistic, so what can be done to minimise the impact of visitors? Clare Simm of the Galápagos Conservation Trust says: “A fine line has to be found for tourism in Galápagos. It’s a key income source for the Ecuadorian government, but there may come a time when further measures will have to be taken. The number of tourists is currently limited by the availability of beds, both on boats and in hotels, so it is imperative that development is regulated.”

There may come a time where tourists numbers are more restricted but for now the Galápagos is open for business and it continues to amaze its visitors. I swam with penguins; I saw pink flamingos graze in a lagoon; I walked on a green coloured sand beach and stood knee-deep in the sea while stingrays swam ticklishly over my feet. In the rainy lush highlands I watched the time-worn giant tortoises lumber through the scrub; I hiked a volcano; walked on jet-black lava fields and sunbathed on white-powered sand. There really is nowhere in the world like it; as Darwin said it’s a “little world within itself”. But it’s our job as tourists to minimise our impact and leave the islands as pristine as possible; for the sake of the wildlife and future generations of tourists to enjoy.

Deirdre Mullins was a guest of G Adventures. Its 10-day Galápagos – Central, South and East Islands package aboard the Monserrat starts at €3,899 per person. The cost includes two nights hotel in Quito, return flights from Quito to the islands, seven nights aboard the Monserrat in twin-share or double cabins, with all meals on board and breakfasts in the hotels, plus two naturalist guides while in the Galápagos Islands (certified by the Galápagos National Park Authority).

You should allow $80-105 (€75-€99) for meals not included over the week. Drinks and tips on board not included. For more information see gadventures.co.uk.

The above does not include international flights from Dublin to Quito.